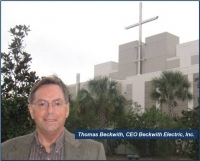 ANN ARBOR, MI – The Thomas More Law Center (TMLC), a national public interest law firm based in Ann Arbor, Michigan, announced that this past Monday, Federal District Court Judge Elizabeth A. Kovachevich of the Middle District of Florida granted its Motion for a Preliminary Injunction banning enforcement of the HHS Mandate.  The motion for a Preliminary Injunction was filed by TMLC on behalf of Plaintiffs Thomas R. Beckwith and his family’s company, Beckwith Electric.

The Government claimed that once a business owner chooses to enter into the marketplace or incorporate his business, he surrenders his right to exercise his religious beliefs.

However, Judge Kovachevich’s 37-page decision which mentioned Thomas R. Beckwith’s unique family history—Beckwith’s ancestors arrived on the shores of America in 1626 to escape religious persecution from England — ended with a powerful statement on religious freedom:

“The First Amendment, and its statutory corollary the RFRA, endow upon the citizens of the United States the unalienable right to exercise religion, and that right is not relinquished by efforts to engage in free enterprise under the corporate form. No legislative, executive, or judicial officer shall corrupt the Framers’ initial expression, through their enactment of laws, enforcement of those laws, or more importantly, their interpretation of those laws. And any action that debases, or cheapens, the intrinsic value of the tenet of religious tolerance that is entrenched in the Constitution cannot stand.” (Emphasis added)

Erin Mersino, TMLC’s lead attorney representing Beckwith, commented, “Tom Beckwith was fighting the Federal Government for the freedom to practice his Southern Baptist faith.  The HHS Mandate would have forced him to provide insurance coverage for abortion-inducing drugs in violation of his religious beliefs or face up to $6 million in annual penalties. Kovachevich’s ruling halts enforcement of the HHS mandate until a final decision is reached in this case.”

The Attorney General of the State of Florida filed a friend of the court brief in support of the Thomas More Law Center, as did several other Christian organizations, including the Ethics & Religious Liberty Commission of the Southern Baptist Convention.