Hundreds of thousands of Polish Catholics gathered in Poland in a massive rosary prayer against the rise of secularization and the spread of Islamization across Europe. The event, “Rosary on the Borders,” was held on the anniversary of the October 7, 1571 naval Battle of Lepanto, in which the outnumbered Christian naval fleet dealt a massive blow to the Muslim Ottoman Empire, saving Christendom from Islamic domination. 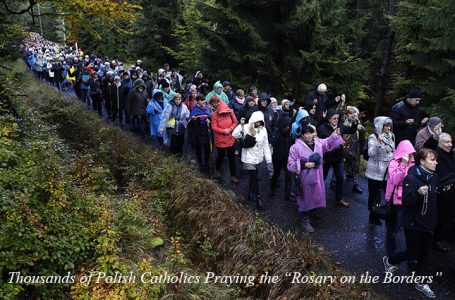 To watch a short video clip of the event, click here.

Catholics from more than 70 different locations in the world joined spiritually with the Polish Catholics including Catholics from the United States, England, France, Sweden, Switzerland, Portugal, Spain, the Philippines and New Zealand.

Clearly, it was a resounding success, as thousands of Poles were bused in from more than 300 churches to points all along the 2,000-mile border. According to the New York Times, participants in Poland gathered for prayer at 320 churches as well as in 4,000 designated prayer zones.

Citizens of all ages, including many elderly, braved the brisk cold weather to take a stand against Islamization and to pray for the salvation of Poland, as well as all of Europe to remain Christian. Approximately 90% of Poland residents identify as Catholic.

To read the New York Times articles and for additional photos of the massive rosary prayer, click here.