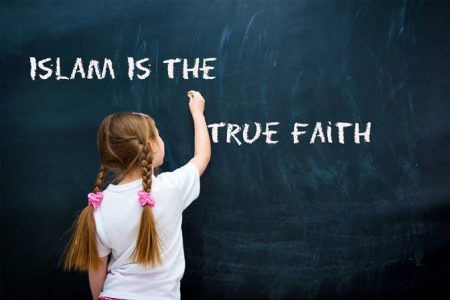 The Thomas More Law Center’s (TMLC) fight against the internal threat to America posed by rampant Islamic propaganda in American public schools has caught the attention of reporters at ChurchMilitant.com.

Richard Thompson, TMLC’s, President and Chief Counsel, was interviewed by Anita Carey, producer for Church Militant. Carey’s resulting article details TMLC’s lawsuit against the Chatham New Jersey School District on behalf of Libby Hilsenrath, who discovered her seventh-grade son’s class was being taught that “Islam is the True Faith” as well as the 5 Pillars of Islam and the Islamic conversion creed, “There is no god but Allah and the Prophet Muhammad is His Messenger.”

Click here for the Islam propaganda video that seventh-graders at Chatham Middle School were forced to watch.

The second Church Militant article entitled Islamic Subversion in Schools, contains within it a short video showing public school students being taught to pray like Muslims. Click here to read the article and link to the video.