Today America marks the 18th anniversary of 9/11 with solemn ceremonies.  As one people we said we would never forget that day. Nearly 3,000 lives were lost amid the smoldering ruins of the Twin Towers, at the Pentagon and on a grassy knoll in Shanksville, Pennsylvania. 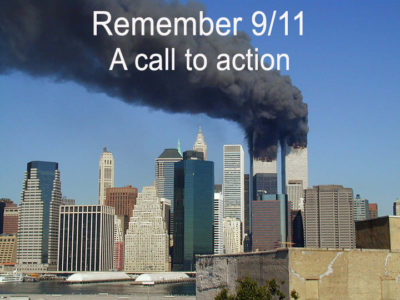 Our first responders showed incredible bravery. American flags were flying everywhere.  Young and old left their jobs to enlist in the military.

But remembering 9/11 is more than a once-a-year ceremony.

It’s about taking to heart the lesson we should have learned that day—Islam’s goal is to destroy America and the values embodied in our Declaration of Independence and the Bill of Rights. Because many Americans have forgotten that lesson, Islam’s plan for civilization jihad is working. Islam is defeating us from within, without firing a shot.

Instead of tolerating this evil ideology, we should heed the words of Abraham Lincoln in his 1838 speech. “As a nation of freemen we must live through all time or die by suicide.”

So, on this 18th anniversary of 9/11 let us keep the flame of retribution burning in our hearts.

Sharia Law now exists in many towns, universities, public schools and corporations. When American citizens are afraid to speak out against Islam, they have already submitted to the first rule of Sharia Law—a ban on all speech deemed offensive to Islam and Muslims.

Presidents Bush, Obama and Clinton, as well as other political and religious leaders, have unashamedly proclaimed the big lie that “Islam is a religion of peace.”

Schools across our nation have become Islamic indoctrination centers teaching students that Islam is a religion of peace and tolerance. They teach students the Five Pillars of Islam and the Islamic conversion creed, “There is no god but Allah and Muhammad is his messenger.” Parents who speak out against this Islamic indoctrination are condemned by school officials and their own communities.

Public school systems like the Novi School District in Michigan pay professional Islamic propagandists to present mandatory training seminars to their teachers where Islam is glorified, Christianity disparaged, and America bashed—all in the name of diversity and multiculturalism.

Christian religious leaders preaching love invite Muslim clerics into their churches. They naively think that by petting the tiger they will change it into a pussy cat. Never mind the 1,400 years of mortal combat between Christianity and Islam.

We now elect Muslims to Congress who take the oath of office with their hands on the Koran, then use their positions to spew anti-Semitic and anti-American hatred while attempting to whitewash the memory of 9/11.

On this 18th anniversary of 9/11 we honor all those who answered our nation’s call to arms and the first responders. Take the time this 9/11 to remember the brave American soldiers who were killed, wounded or are still suffering, as a result of the wars against Islamic terrorists in Afghanistan, Iraq and other places. Also remember the sacrifices made by our committed law enforcement.

Pray for all our men and women who are in harm’s way today defending our nation.