While we watched the commander-in-chief drinking beer and playing pool last week, we learned that 1,100 Army captains — some in harm’s way on the front lines in Afghanistan—were receiving pink slips notifying them they were fired.   How demoralizing, heartless, and stupid. 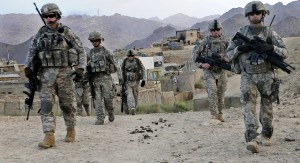 These captains now must lead and care for the Soldiers entrusted to them in combat, dodge the bullets and IEDs, and at the same time worry about finding a job when they get back home, that is, if they ever do.    As one Army wife posted on MilitaryFamily.org, “On some level I knew the draw downs were inevitable, but I guess I never expected to be simultaneously worried about a deployment to Afghanistan and a pink slip because my husband’s service is no longer needed.”

This is another stark example of domestic politics trumping our national security interest.

The experience and knowledge about the enemy and counter insurgency these officers have gained is irreplaceable.

The very Army leadership we are eliminating are the leaders we most desperately need to retain.   Why?  Because they represent three critical talent streams that will be essential in our next war (and there WILL be a next war, and it will likely be sooner than anyone wants):

Given the recent events of China threatening its Pacific neighbors, an emboldened and bellicose Russia threatening Ukraine and inserting itself in Latin America, Iran ever closer to nuclear weaponry and a Middle East now descending into a virtual free-fall of Islamist inspired chaos why would anyone inside the White House be stupid enough to press ahead with these drastic levels of military cuts?    It is tantamount to willful negligence on the part of our nation’s political leadership.

Our Army is currently at 510,000, well below the Clinton Era Army.  The current cuts are aimed at reducing it to 490,000.  And the most recent defense budget proposal from the Pentagon, now working its way through Congress, calls for an Army of 450,000 soldiers.

It seems our troop reduction policies are based on how we would like the world to be, not what it really is.  We have forgotten George Washington’s admonition, “To be prepared for war is one of the most effective means of preserving the peace.”

Moreover, we are reducing our military ranks without regard to our own dismal history in accurately predicting both the timing and nature of our next war.  In February 2011, then Secretary of Defense, Robert Gates, told an audience of West Point cadets: 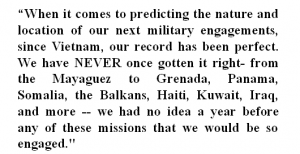 Major force reduction is a bridge the U.S.  Army has crossed often, especially during the big post-war draw downs.    The post World War I and World War II era draw downs were very large, but these were entirely expected and economically necessary.

Although the Pentagon is attempting to soften current separations, the fact remains: it is putting out young officers into a weak economy which still hasn’t recovered from the 2008-2009 recession.  These young officers and their families agreed to devote their lives to defending our country.  Now they are rightfully concerned about finding a job (the unemployment rate for recent veterans is incredibly high).  We thank them for their service.  But Washington will spit them out in another 10 months.

President John F.  Kennedy, on November 26, 1962, addressed the First Armored Division, at Fort Stewart, Georgia.   The Division had been deployed during the Cuban Missile crisis.   In his remarks he quoted from a poem found in a sentry box in Gibraltar:

How sad but true.