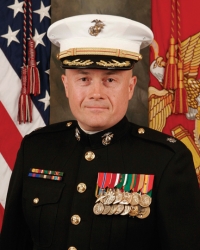 The Thomas More Law Center supports America’s First Military Principles of Virtue, Honor, Patriotism and Subordination, established by John Adams in 1775. The U.S. military is the most effective fighting force in the history of the world, and it is the only institution Americans can depend on to defend our Nation and our Constitution. The Law Center opposes any attempt to downsize, degrade or dismantle the combat effectiveness of our Armed Forces. The Law Center successfully defended Marine LtCol Jeffrey Chessani after he was made a political scapegoat to appease the antiwar movement in the so-called 2005 “Haditha Massacre” prosecution.

The Law Center opposes the Defense Department’s actions to homosexualize our military and to dilute and destroy its core values and standards of exemplary conduct. Furthermore, the Law Center opposes politically motivated Rules of Engagement (ROE) that place our troops in unnecessary danger.

The Law Center believes that proposed defense cuts and a weak foreign policy undermine our national defense. The Law Center opposes the release of nuclear arsenal quantities, the cancellation of missile defense systems, and the shrinking of our Navy to fewer than 280 ships – the smallest fleet since World War I.

The Law Center opposes any attempt to surrender our national sovereignty to the United Nations or any other international organization. In addition, the Law Center supports the right of States to protect their borders against the massive invasion of illegal immigrants.