In his 1995 encyclical, The Gospel of Life, Pope Saint John Paul II warned that “we are facing an enormous and dramatic clash between good and evil, death and life, the ‘culture of death’ and the ‘culture of life.’” 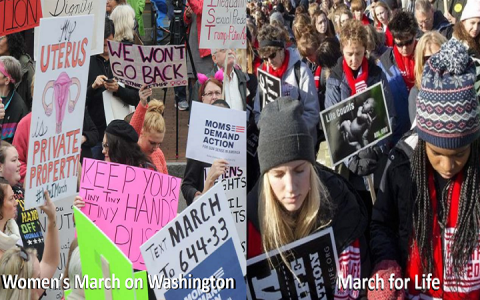 Within one week, Americans will have witnessed that dramatic clash between “good and evil”. It is a Tale of Two Nations:  the Culture of Life and the Culture of Death.   Last Saturday the “Women’s March on Washington,” filled with vulgarity, called for violence and praised the killing of unborn children.
Today, Americans will witness the 44th National March for Life.  There will be no vulgarity, no viciousness, and no calls for violence.  It will be filled with fervent prayers and a call to end abortion, which was made a constitutional right by Roe v. Wade.
The pro-life marchers will peacefully proclaim their message which will reverberate throughout the land.  It is also the first time in many years that marchers feel their voices will be heard by the President.   In fact, it is the first time ever that a Vice President of the United States will personally address the marchers.
Vice president Mike Pence confirmed that he will personally address the March, as will Counselor to the President, Kellyanne Conway.
Pray for the women who have had abortions, pray for the 60 Million unborn children who have been killed in their mother’s womb, pray for those unheralded soldiers in the pro-life movement who every day of the week fight to save the unborn, and pray that God will one day forgive our nation which has promoted this culture of death.