A must read.  Recent events have shown us that Islam is anything but a “religion of peace.” But, it is the willingness of US politicians and world leaders to submit (grovel) to Islam in the name of political correctness that is truly galling. Our own Secretary of State thanked the Iranians for humiliating American sailors by forcing them to submit to Islamic codes. 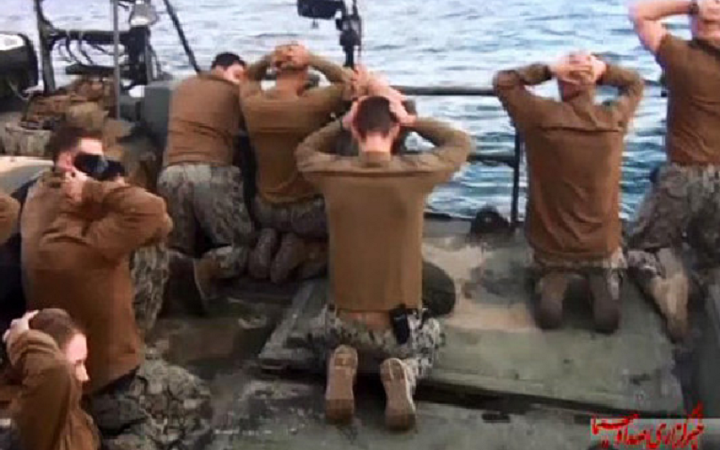 Below is Professor William Kilpatrick’s insightful view of the recent events between Iran and the US, as well as the events in Cologne, France. The article carefully explains how our submission to political correctness is allowing Islam to take over.

Dominance and Submission in Cologne and the Persian Gulf

Under the Islamic dhimmi system, when Christians paid the jizya tax, they were often required to kneel before the local Muslim dignitary as a sign of submission. Sometimes the tax collector would deliver a slap to the face as an added humiliation. This was in accordance with the Koranic injunction that non-Muslims must not only pay the tax, but also “feel themselves subdued” in the process (9:29).

What is the meaning of the word “Islam” again? “Peace?” Er, no. That was what the vast majority of Americans thought it meant circa 2001. But since then, most of us, with the exception of a couple of presidents and Secretaries of State, have discovered that it actually means “submission.”

Islam is a very tolerant religion. It doesn’t require that you convert to it as long as you submit to it. All they are asking for is a little groveling. Thus, if you are a Christian living in the Ottoman Empire you kneel while you pay the eighty-percent tax, and if you’re a sailor in the U.S. Navy whose boat mysteriously falls into Iranian hands you kneel and then offer apologies for your behavior while thanking your captors for their “fantastic” hospitality. Oh, and if you’re a female sailor, all you have to do is don a hijab as a sign of respect for, and submission to, the codes of Islam.

In the meantime, be assured that your Secretary of State will back you up by offering his own profound appreciation for “the quick and appropriate response of the Iranian authorities.” At the same time, your president can be relied on not to mention the incident at all, he having made some sort of gentleman’s agreement with the Iranians which requires him to pretend that everything they do is both fantastic and appropriate.
About two weeks prior to the naval incident, the German nation was subject to another form of humiliation. On New Year’s Eve, a group of 1,000 North African and Arab men sexually assaulted women outside the main train station in Cologne. The total number of victims who were either robbed or sexually assaulted was about six hundred. Many of the women were forced to run through a gauntlet of their tormentors. Similar occurrences took place in about 17 other major European cities that night.

In a sense, this was the logical conclusion to Europe’s inability to resist other Islamic advances. European leaders had opened their borders, their welfare coffers, and their public housing to well over a million Muslim immigrants (seventy percent of whom were male) in less than a year. Coming from cultures where yielding is a proof of weakness, the Muslim invaders concluded that they could take what they wanted—both the welfare and the women.

A large part of the West’s difficulty in dealing with Islamic aggression can be traced to a massive identity crisis. Having traded its traditional identity markers for multicultural ones, the West no longer knows how to act when it is threatened. Being multicultural means being tolerant of every diversity. But if you’re tolerant of everything, the end result is that you stand for nothing.

More and more, it seems that Westerners will stand for just about any humiliation. While Muslims in madrassas are learning that they have the superior culture and the superior religion, Western students learn that no Western value is worth defending—including the traditional notion that women should be protected from rampaging males. At one time, both men and women acknowledged that there are differences between the sexes, that one of those differences is physical strength, and that, as a consequence, there are circumstances where male protection is desirable. Having dispensed with that “quaint” notion, Western societies seem to have fallen back on the notion that, given the right multicultural conditions, people will naturally behave in harmonious ways. When you put that assumption into practice, what you get, of course, is smaller, more multiculturally sensitive police forces.

According to one report, police in Cologne were unable to control events because they were “overwhelmed.” In other words, they lacked the manpower to be of much help that winter’s night. “Manpower.” It’s a curious word. Even today it would seem odd to say that a police force lacked “womanpower,” although men-only police forces are a thing of the past. Women do have various kinds of power, but it’s still understood that “manpower” and “womanpower” are not quite the same thing.

In any event, the Cologne police lacked manpower in both senses of the word. They were lacking in numbers that particular night, but even when in full force they seem to lack the instinctive masculine response that was once expected of civilized males. As I have written elsewhere, “the multiculturalist code is essentially an emasculating code. It has the effect of paralyzing the normal masculine response of coming to the protection of those in danger.”

In the case of the Cologne police and other state authorities, this lack of response would include not having the foresight to anticipate that German women would be at heightened risk once a million-man army newly arrived from misogynist cultures made its appearance. The problem is that European authorities are more committed to protecting multicultural pieties than to protecting ordinary citizens from Islamists gone wild. Thus, the initial police report of the evening’s events read: “A mood of exuberance—largely peaceful celebrations.” That’s “largely peaceful” if you don’t count the thousand marauding Muslims outside the train station and the cathedral. Anyone who follows the goings-on in Europe knows that the authorities’ top priority is to protect the sensitivities of the newcomers from the outrage of “Islamophobia.” As for the common folk, they are expected to do their best to understand the other culture and adjust to it. If they protest, the penalties can be severe. In the UK, when Tommy Robinson, the leader of the counterjihad movement in England, was jailed, it was for the horrific crime of having exaggerated his income on a mortgage application. When he arrived in prison, he was thrown into a cell containing several Muslims who brutally beat him—as the prison warders knew they would.

No doubt there are some tough fellows in the Cologne police force, but their toughness has been enlisted in the service of political correctness. When, a week after the New Year’s Eve assaults, the anti-immigration group, PEGIDA, rallied to protest the attacks, a massive force of Cologne police wearing riot gear broke up the demonstration using water cannons and pepper spray. The PEGIDA people have become used to that sort of treatment. They have been repeatedly attacked by German politicians and the German press as “extremists,” “xenophobes,” “racists,” and “Nazis.” And German police have on several occasions left them to the mercy of the brutal and usually much larger leftist or “anti-fascist” gangs.

The police and the politicians can be quite tough in enforcing multicultural codes, but their toughness is in the cause of cultural soft-headedness. That’s because multiculturalism is basically the process by which a culturally confused society surrenders itself to a more confident and aggressive culture. You can call the current conflict between Islam and the West a “clash of civilizations,” but that’s rather like describing the encounter between a sadist and a masochist as a clash. As I wrote a few years ago:

It’s difficult to conceive of a more disastrous combination of events than the simultaneous emergence on the world stage of a fiercely passionate ideology dedicated to conquering the West, and of another, dangerously naïve ideology, eager to dismantle it from within.

What the West sees as signs of tolerance and sensitivity are seen by Muslims as signs of submission and also as a validation of their belief that theirs is indeed the superior culture. Western appeasement will not garner more respect from the Muslim world, but it will bolster the jihadi recruitment campaign. After the navy crew surrendered in the Persian Gulf, an Iranian commander remarked:

I saw the weakness, cowardice, and fear of American soldiers myself… American forces receive the best training and have the most advanced weapons in the world, but they did not have the power to confront the Guard due to weakness of faith and belief.

Gestures of compliance do not convince Islamists that we are an admirable people, it only convinces them that they have the winning hand. Unless Western leaders get a better grip on the realities of Islamic culture, they will continue to set up their own citizens for one humiliation after another. The only consolation is that after a while, they may learn to adjust to their dhimmi status. When they kneel to pay the jizya, it may well be with expressions of gratitude for the “fantastic” and “appropriate” behavior of their masters.