In 1995, by an overwhelming bi-partisan vote, the U.S. Congress adopted the Jerusalem Embassy Act, which mandated the recognition of Jerusalem as Israel’s capital and the re-location of the American embassy from Tel Aviv to Jerusalem, by 1999. And just 6 months ago the Act was reaffirmed by a unanimous vote of the Senate. 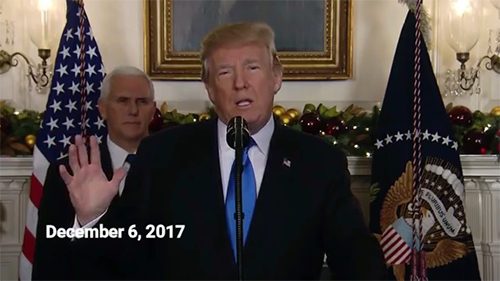 On December 6, 2017, a day that will be gratefully remembered in Jewish history, President Trump officially recognized Jerusalem as the capital of Israel and announced that America’s embassy would be moved from Tel Aviv to Jerusalem.  He kept his promise.  It was a courageous and just decision.

Over 3,000 years ago, long before Christ or Mohammed walked on Earth, King David recognized Jerusalem as the eternal capital of Israel. Responding to President Trump’s announcement, Israel’s Prime Minister Benjamin Netanyahu, commented “Jerusalem has been the capital of the Jewish people for 3,000 years…. It was here that our temples stood, our kings ruled, our prophets preached.”

“But I have chosen Jerusalem, that my name might be there; and have chosen David to be over my people Israel.”  2 Chronicles 6:6

Despite the clear mandate of the Jerusalem Embassy Act, and their solemn campaign promises to recognize Jerusalem as Israel’s capital, three presidents, Clinton, Bush, and Obama, failed to deliver.

A video clip of their promises, here.

Apparently, these three past presidents were more concerned about Muslim reaction than implementing the clear wishes of the American people expressed through their elected representatives in Congress.

President Trump delivered on his promise, undaunted by the catalogue of threats of violence and fury which would be unleashed on us by the Arab world.

Inflamed by their leaders, enraged Muslims routinely take to the streets chanting anti-American slogans and burning our Flag. Use of these mobs is a favorite tactic of our “friendly” Muslim leaders who seek to change our policies. These wild-eyed demonstrations and threats of violence must never influence our foreign policy.  It may have worked in the past.  Not anymore.  There’s a new sheriff in town.

Israel is a trustworthy friend.  Moreover, it has the most powerful military in the Middle East and a western style democracy to which we have a close affinity. It stood alongside the U.S. and served as a buffer to Soviet influence in the Middle East in the 1970s. We now have a strong alliance fighting Islamic terrorism.

Let’s stand fast with Israel over our double-dealing so called “Muslim allies,” whose strategic goal is animated by their religion of Islam, which calls for the destruction of Western Civilization, the domination of America and the establishment of a caliphate. Significantly, Turkey, with its horrible history of human rights violations and an on again off again friendship with the United States, has already developed a new partnership with Putin.

Contrary to the hand wringing predictions of doom from our European allies, the UN and the EU—whose policies have already initiated the beginning of an Islamic domination of their cultures—President Trump’s bold new move may actually jump-start a meaningful peace process, a process which for over two decades has been nothing but a meaningless mirage.