This Saturday, October 7, over a million Catholics in Poland are expected to gather along Poland’s 2,000-mile border in a massive rosary prayer crusade entitled “Rosary on the Borders.” Their purpose is to commemorate the anniversary of the October 7, 1571 Battle of Lepanto, during which the outnumbered Christian naval fleet dealt a massive blow to the Muslim Ottoman Empire, saving Christendom from Islamic domination. 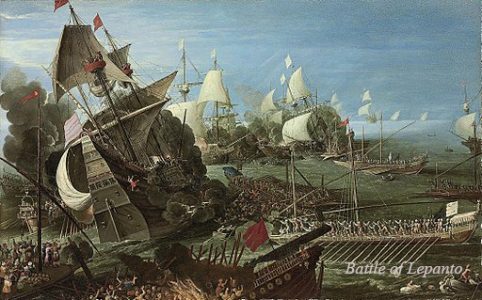 The Islamic Ottoman Empire, under the rule of Soleiman the Magnificent, desired to conquer Italy and dominate Europe. He yearned to bring all of Europe within the dar al-Islam, submissive to Sharia law. The Sultan envisioned building a mosque in St. Peter’s Square in Rome, as Muslims had done a century earlier in Constantinople with the construction of Hagia Sophia.

When Pope Pius V realized that Muslims intended to dominate Christian Europe, he formed the Holy League to confront the Sultan’s war galleys. He knew this was indeed a war between Christianity and Islam. He appointed a young warrior, Don Juan of Austria, to lead the Holy League in naval combat. Taking the young warrior by the shoulders Pius V said, “The Turks, swollen by their victories, will wish to take on our fleet, and God – I have the pious presentiment – give us victory. Charles V [his father] gave you life, I will give you honor and greatness.  Go seek them out.”

On the night before the battle, as the Muslim fleet descended upon the Gulf of Lepanto, Pius V ordered all the churches remain open, and recommended the faithful invoke the intercession of the Blessed Virgin Mary through the prayer of the Rosary.

The battle lasted for five hours. Shortly before the first cannons went off, Captain Juan told his men, “Gentlemen, the time for counsel has passed. Now is the time for war.”

Before the first shot was fired, Captain Juan knelt in prayer on his ship, the Real. He then stood and ordered the Holy League’s battle standard to be unfurled. It was a gift from Pius V, a giant blue banner bearing an image of the crucified Christ. Christians up and down the battle line cheered as it was unfurled for the enemy to see.

Aboard the Holy League’s vessels were priests from various Catholic orders including Franciscans, Capuchins, Dominicans, Theatines, and Jesuits. They held large crucifixes and walked the decks of the galleys, exhorting the men to be brave, as well as offering Mass and hearing confessions. Many of the oarsmen were criminals. Don Juan ordered them all unchained, issued them a weapon, and promised to free them if they fought bravely. He gave every man a Rosary, emphasizing that they were about to engage in a spiritual battle.

The Muslims had their own battle standard, a green silk banner, with the name of Allah stitched in gold calligraphy 28,900 times. At the height of the battle, the opposing flagships, Don Juan’s Real and Ali Pasha’s Sultana, engaged in bloody fighting. The Sultana was captured.

The Muslims suffered a disastrous defeat: 187 ships were sunk or captured, and 30,000 Muslims dead or wounded and another 10,000 Muslims captured. On the other hand, the Holy League lost only 17 ships, and suffered 10,000 deaths. The Holy League also freed approximately 12,000 Christian captives who had been chained to the oars of the Sultan’s ships.

This triumph of Christianity and Western civilization over Islam in the Battle of Lepanto was attributed to prayers and the intercession of the Virgin Mary.

The Battle of Tours

The first battle between Christian Europe and Islam occurred on October 10, 732. The victorious Christian forces led by Charles “The Hammer” Martel (grandfather of Charlemagne), preserved Christianity in Europe at a time when Muslims were achieving victory after victory in other parts of the world. Without this decisive victory, the Franks and eventually the rest of Europe and England would have been overrun by the Umayyad Caliphate.

The Battle of Vienna

One of the last battles in history between Catholics and Muslims occurred in 1683. The Battle of Vienna occurred when an alliance of Christian armies led by Jan III Sobieski, the King of Poland, gained victory over the Turks, thus saving the city of Vienna from Islamic rule. This would not have happened if it weren’t for Pope Innocent XI. He recognized the danger posed by the Ottomans, and, in the name of God and the Church, called on all the rulers of Central Europe to unite against their common enemy. Sobieski led a force of 40,000 Poles and their German and Austrian allies in the victory over the Turks.

Clearly, the world known as Christendom would look completely different today had there not been courageous religious leaders like Pope Pius V and Pope Innocent XI; and military leaders like Charles Martel, Don Juan of Austria and King Sobieski of Poland. They clearly understood the battles were between Christianity and Islam, between God and Allah.

In this new century, too many Catholics are forgetful of the spiritual battles and heroic sacrifices of Catholics in the past. They readily accept the lie that Islam is a religion of peace, love and brotherhood.