ANN ARBOR, MI – Over eight months after first being sued by the New York Attorney General, and after a marathon preliminary injunction hearing that stretched over four weeks, Angela Braxton, a pro-life Christian and side walk counselor, finally took the stand late last week to explain why she spent years regularly ministering outside of a large abortion facility in Jamaica, Queens. 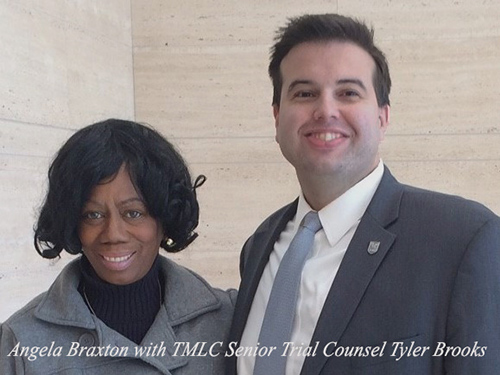 Attorney General Eric Schneiderman, who complained about “a sense of entitlement by protestors to run their mouth,” named Braxton and more than a dozen other Christians as defendants in his federal lawsuit filed last June. The lawsuit asked a federal court to impose a sixteen-foot buffer zone around the abortion premises and levy draconian fines, attorney fees and compensatory damages against the defendants.

The Thomas More Law Center (“TMLC”), a national public interest law firm based in Ann Arbor, Michigan, is defending Braxton and co-defendant Jasmine Lalande, another Christian sidewalk counselor, in the lawsuit. Tyler Brooks, TMLC’s lead attorney in the case, who conducted the direct examination of Ms. Braxton, commented, “It is a privilege to be able to defend these two brave individuals against the Attorney Generals’ unconstitutional assault on free speech.”

Richard Thompson, TMLC’s President, added, “After over a dozen witnesses called during the four-week hearing, the only picture of our clients emerged was that they were two humble Christian women peaceably making the last chance effort to save the lives of unborn children.”

In her moving testimony, Braxton described growing up in Brooklyn, New York, including being among the first African-American students bused to majority white schools as part of desegregating the New York City school system. She also explained having suffered numerous miscarriages as a young woman—an emotional experience that made her realize the preciousness of all life.

Her Life Changed After 9/11

Braxton further told the Court how her life changed after the 9/11 terrorist attacks. On that day, Braxton was working on the 80th floor of One World Trade Center. Braxton detailed for the Court the harrowing experience of trying to escape the burning building until she made it to the underground mall below the World Trade Center Complex. While trying to make her way out of the mall, she suddenly felt rumbling, which she would later learn was caused by the collapsing of Two World Trade Center above her. The force of the building’s collapse caused her to be “thrown around like . . . being thrown up in a tornado,” Braxton testified. In that moment, Braxton said, “I’m screeching for God not to let me die.”

An Associated Press photographer took an iconic photo of the debris-covered Braxton as she escaped from the fallen tower. That photograph now hangs in the Smithsonian National Museum of African American History and Culture.  To view the photo, click here.

Following the 9/11 attacks, Braxton turned to faith and became a Christian. Several years later, she felt called to start ministering to patients entering abortion clinics. In her testimony, Braxton explained why she used to spend Saturday mornings trying to speak to women who might be contemplating abortion:

“I believe because of what I went through as far as wanting so many children….It’s the worst thing. It’s never healed. You always long for them.  And I wanted other people to know that.  But more importantly, God saved me when I was a sinner. Christ died for me. He gave me a new heart, and He gave me a heart to love Him, to love my neighbor….Why wouldn’t I love my neighbor enough [to share this]? That’s my belief, and I believe God’s Word is true.”

Braxton, who has numerous medical conditions linked to her injuries from 9/11, also described being fearful of how a victory by the Attorney General in this lawsuit would prevent her from continuing to evangelize and spread the Gospel. If the fees sought by the Attorney General are assessed, Braxton said she would lose her apartment, but she courageously added: “I know God would provide.”