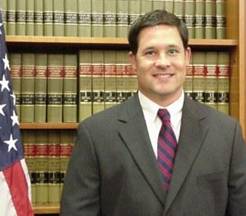 As a Marine, Bolling served as a Judge Advocate in a wide variety of assignments, including two hostile fire/combat zone tours during Operation Enduring Freedom.  He prosecuted and defended many high profile military criminal cases which garnered national media attention.  The story behind one of his criminal cases became a bestselling novel. Brandon’s military education includes Officer Candidates School, The Basic School, Naval Justice School, and Expeditionary Warfare School.

Bolling reports directly to Richard Thompson, President and Chief Counsel of the Law Center.  On this new appointment, Thompson commented, “He’s a great addition to our staff.  Brandon has already demonstrated his faith, love of country, proficiency as a lawyer and commitment to our mission.  He served his country well as a Marine – he will continue to serve his country on behalf of Christians on a new battlefield – the courts.  I have a bias for lawyers with combat backgrounds, and hope to add more as the funds become available.  They make great lawyers in the Culture War.”

A Michigan native, Bolling received a B.A. in Political Science from Michigan State University in 1995.  While a student, he joined the United States Marine Corps and was commissioned a Second Lieutenant.  As a law student, Bolling also worked as a full-time clerk for a large Farmington Hills law firm.  In 1999, he completed his Juris Doctorate at the University of Detroit-Mercy School of Law.

Brandon Bolling served eleven years as a Marine, attaining the rank of Major.  He received seventeen medals and decorations for his distinguished military service. Brandon was regularly sought out by peers and the media for his opinion on a wide variety of legal issues.

Brandon is a dedicated husband and proud father of three children.  He and his family relocated to Michigan from Rhode Island in order to establish permanent roots and begin his work with the Law Center.

Said Bolling, “I accepted this position at the Thomas More Law Center to help defend attacks upon traditional American values and the foundational principles of the United States Constitution.”

Two other Law Center attorneys, Robert Muise and Brian Rooney, are former Marine officers who served combat tours as well. Muise is a former Marine infantry officer veteran of the first Persian Gulf War and a former Judge Advocate who joined the Law Center in 2000.  Rooney is a Marine veteran of Operation Iraqi Freedom and a former Judge Advocate.  Rooney joined the Law Center in the Fall of 2006, shortly after returning from a combat tour in Iraq.  Both Muise and Rooney have been actively involved in the defense of Lt. Colonel Jeffrey Chessani, the highest ranking Marine officer charged in the so-called “Haditha Massacre.”

The Law Center is defending Chessani without charge.  To assist with deferring the costs of litigation, the Thomas More Law Center has set up a fund called “LtCol Chessani Defense Fund.” You can visit the Law Center’s website (www.thomasmore.org) to make a donation to this worthy cause.

The Thomas More Law Center defends and promotes the religious freedom of Christians, time-honored family values, and the sanctity of human life through education, litigation, and related activities.  It does not charge for its services.  The Law Center is supported by contributions from individuals, corporations and foundations, and is recognized by the IRS as a section 501(c)(3) organization.  You may reach the Thomas More Law Center at (734) 827-2001 or visit our website at www.thomasmore.org.