On Monday, October 6th, the United States Supreme Court announced, without any explanation, that it would not review court of appeals cases which overturned state laws of five states defining marriage as exclusively the union of one man and one woman.   And on Tuesday, the Ninth Circuit Court of Appeals overturned the traditional marriage laws of Idaho and Nevada. 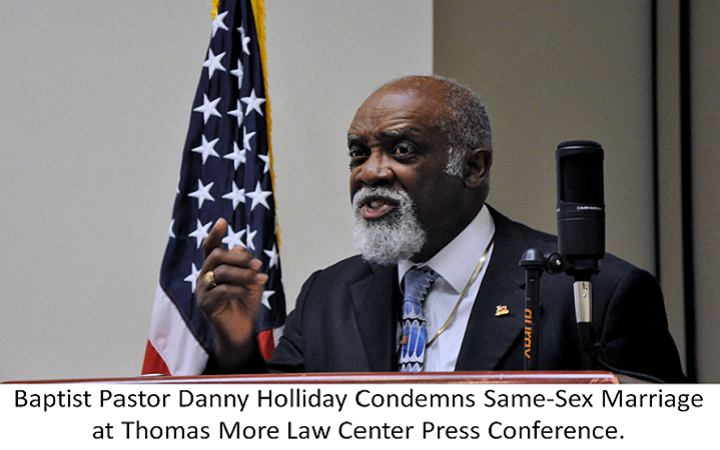 As a result of the decisions this week, 32 states are potentially forced to recognize so called “same-sex marriage” by edict of unelected federal judges holding life-time appointments.

Regardless of these legal setbacks, members of the National Coalition of Black Pastors and Christian Leaders, represented by the Thomas More Law Center, a public interest law firm based in Ann Arbor, Michigan, vow to fight on.

Coalition member, Pastor Danny Holliday, of Victory Baptist Church, Alton, IL commented: “Just as the Supreme was all wrong on slavery, which resulted in the Civil War, it is all wrong on legalizing same-sex marriage.  I have seen prayer removed from schools, Christmas Nativity Scenes removed from public property. I have watched as the words Merry Christmas have become taboo. I have watched the news as we were told that Courts have ruled that crosses were now illegal on Government property, many of them in place since the World Wars.”

Janet Boynes, Evangelist and author of “ARISE”, who is a former lesbian, also expressed disappointment in the Court’s ruling not to hear the cases, “It is a sad day when the Supreme Court, in its own way, comes out in support of gay marriage by refusing to hear our appeals.”

Minister Stacy Swimp of Revive Alive Missional Ministry, stated, “The Supreme Court’s refusal to hear the marriage protection appeals is both disappointing and alarming.  By its decision not to hear these cases, the Court appears to advance an anti-Christian agenda which in this case will ultimately lead to the disintegration of the family as ordained by God.”

Janet Boynes issued a warning to the nation: “The Generations to come will suffer the consequences of our poor choices. So many people are clueless about who they are and who God has created them to be. But, there is too much at stake for us to throw in the towel. We must rise up and fulfill the call that God has placed on us as a body of Christ. Our future as a nation depends on it!”

At a September 23, 2014 press conference, the Thomas More Law Center revealed a national legal strategy to combat the slew of federal court rulings which have overturned state laws defining marriage as the union of a man and a woman.

The Law Center formed a team of lawyers to file friend-of-the-court briefs (amicus briefs) throughout the nation in support of traditional marriage on behalf of the National Coalition of Black Pastors and Christian leaders.  The Law Center’s briefs reflect the view of a majority of African-Americans: that discrimination because of one’s sexual preference is not the same thing as racial discrimination and that tradition and morality should not be discarded as a basis of the law; as the pro-homosexual judges have done in their opinions.

Despite the recent court rulings, the Thomas More Law Center will continue to file amicus briefs in significant cases concerning the definition of marriage in order to convey the unique voice of the African-American Christian community on this issue crucial to the survival of our families, culture, and nation.

Thus far, the Thomas More Law Center has filed 2 amicus briefs on behalf of the Coalition involving petitions for review in the US Supreme Court: Herbert v. Kitchen, an appeal of the Tenth Circuit Court of Appeals decision overturning Utah’s law defining traditional marriage and Rainey v. Bostic, an appeal of the Fourth Circuit Court of Appeals decision overturning Virginia’s law defining traditional marriage.  The Supreme Court denied review in both those cases.

The Law Center also filed an amicus brief in Deboer v. Snyder, an appeal of a Detroit federal court decision overturning Michigan’s law on traditional marriage.  That case is awaiting a ruling from the Sixth Circuit Court of Appeals.

The Law Center is also planning to file an amicus brief in the Louisiana case of Robicheaux v. Caldwell, currently on its way to the 5th Circuit Court of Appeals.