ANN ARBOR, MI – The Thomas More Law Center (“TMLC”), a national public interest law firm based in Ann Arbor, Michigan, today announces that the closing chapter in a lawsuit has ended with a victory for Bill Donohue and free speech, as the time for appealing TMLC’s win in the 8th Circuit U.S. Court of Appeals to the U.S. Supreme Court has passed. 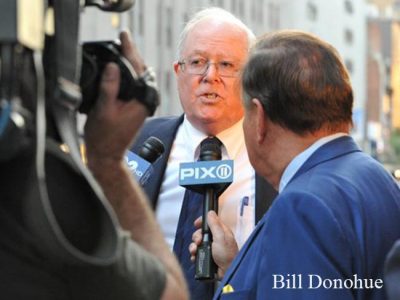 Bill Donohue, President and CEO of the Catholic League, is considered by most Americans as the fiercest defender of the Catholic Church in the world. He is often called to appear on national TV to respond to controversial attacks made against the Church. So, when he asked the Thomas More Law Center to defend him and the Catholic League in a defamation lawsuit filed because of comments in a press release, without hesitation we agreed.

Beginning in 2014, the case wound its way through both the state and federal courts. On April 18, 2017, the 8th Circuit U.S. Court of Appeals issued its opinion affirming a lower court decision which ruled in favor of Bill Donohue and the Catholic League by dismissing all claims in the lawsuit, including the defamation claim. The 90-day window for asking the U.S. Supreme Court to review the 8th Circuit Court of Appeals decision has now lapsed.

You can read the 8th Circuit Court opinion here.

Erin Mersino, who handled the case on behalf of the Thomas More Law Center always contended that lawsuit filed by Jon David Couzens, Jr. lacked legal merit and required dismissal.  Although she no longer works for TMLC, Erin recently commented on the final end of case: “The plaintiff’s decision not to appeal the case further vindicates this important victory for free speech. The Thomas More Law Center and the Catholic League are two heroic organizations that vigorously fight for religious freedom in our culture today. It has been a true honor representing Bill Donohue, the President and tenacious captain of the Catholic League.”