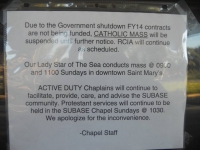 The Government capitulated just one day after the Thomas More Law Center (TMLC), a public interest law firm based in Ann Arbor, MI, filed a federal lawsuit challenging the Department of Defense’s actions which

prohibited a Catholic Priest from celebrating Mass at a Naval base under threat of arrest and barred the Chapel to Catholic religious services due to the government shutdown.

TMLC attorney Erin Mersino filed the lawsuit in the Federal District Court in Washington DC on Monday on behalf of Father Ray Leonard and Fred Naylor, a parishioner.  The lawsuit is the only legal challenge to the Government’s shutdown of religious services.  Other Christian denominations were allowed to continue their religious services.

Late yesterday afternoon, in response to the lawsuit, three attorneys from the Department of Justice contacted TMLC attorney Erin Mersino by phone and indicated that Father Leonard could resume all of his religious duties beginning this morning, and that the Chapel would be open for all Catholic activities.  These representations made by the Department of Justice attorneys were confirmed by orders to Father Leonard delivered through the Navy chain of command.

Richard Thompson, President and Chief Counsel of the Thomas More Law Center, said, “The actions of the Federal Government were a blatant attack on religious liberty. I would never have imagined that our Government would ever bar Catholic Priest from saying Mass under threat of arrest and prevent Catholics from participating in their religious exercises.  Allowing the Chapel doors to open and Father Leonard to fulfill his priestly responsibilities does not erase the Constitutional violations that occurred.  We don’t want this to occur again the next time there is a government shutdown. Our lawsuit will continue.”

On October 4, 2013, the Department of Defense informed Fr. Leonard that he was non-essential and would be furloughed, even given provisions in the Pay Our Military Act which cover the services of employees who contribute to the morale and well being of the armed services. Fr. Leonard was threatened with arrest for visiting the chapel where the Holy Eucharist was stored or celebrating Holy Mass on base on a voluntary basis. Protestant religious services at Kings Bay were allowed to continue throughout the shutdown. Only Catholic service members were left without services.