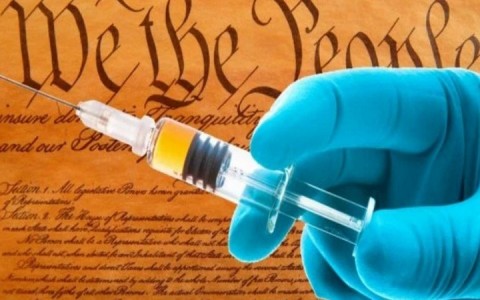 TMLC brought the law suit on behalf of Tara Nikolao, a devout Catholic, registered nurse, and mother of four.  Mrs. Nikolao objects to vaccines manufactured from aborted fetal cells and other vaccines on religious grounds.  Her lawsuit claims that government employees violate the Free Exercise and Establishment Clauses of the First Amendment, the religious protections in Michigan’s Constitution, and a Michigan statute when they subject parents to detailed interrogation about their religious beliefs.

The Michigan legislature enacted a statute in 1978 to protect the right of parents to exempt their children from vaccinations because of religious beliefs.  For nearly 40 years, this mandatory religious exemption remained unchanged. All that parents had to do was state in writing that they cannot comply with the vaccination requirements because of their religious beliefs. Mrs. Nikolao exercised her statutory right to a religious exemption approximately 10 times before a new rule was implemented in December 2014. This new administrative rule requires parents to drive to local health departments, submit to a religious inquisition, and explain their religious beliefs to local health department employees in order to receive a waiver.

In October 2015, in an effort to comply with the new rule, Mrs. Nikolao took time off work, packed her four children into the car, and drove approximately an hour to the Wayne County Health Department office in an attempt to obtain a religious exemption. Upon her arrival, two health department employees bullied and harassed Mrs. Nikolao because of her religious beliefs.

When Mrs. Nikolao explained that she had a religious objection to vaccines, the health department employees demanded that Mrs. Nikolao explain her actual reason for objecting. Despite Mrs. Nikolao’s repeated insistence in the face of berating questions from State employees that her personal religious beliefs did not allow her to vaccinate her children—a belief that the Michigan legislature enacted a statute to protect,—the health department employees would not accept her religious objection and insisted that no religions object to vaccines.

The Michigan Department of Health and Human Services (“MDHHS”) instructs local health department employees to implement this religious examination and inculcation by providing county employees with a document to “teach” parents their faith.  The document entitled “Religion” is used as a tool by county health departments to coerce and trick parents with religious objections to vaccines into vaccinating their children.

In Mrs. Nikolao’s case, health department employees used the MDHHS Religion document, which falsely attributes a quote to Pope Benedict XVI, in an attempt to coerce her into violating her beliefs by vaccinating her children. The documents claims that, according to Pope Benedict XVI, “parents who chose not to give vaccines derived from [aborted fetal] cells would be in ‘more proximate cooperation with evil’ than those who gave their children the vaccines in question because of the life-saving nature of vaccines.” Pope Benedict never made such a statement.  Moral Reflections, the Vatican document produced on vaccines containing the cells of aborted children by the Vatican’s Pontifical Academy for Life, also did not contain any condemnation of parents who refuse to vaccinate, especially not the MDHHS characterization of parents who do not vaccinate their children as “evil.”