ANN ARBOR, MI – In startling courtroom admissions during cross examination by Thomas More Law Center (“TMLC”) attorney, Tyler Brooks, the New York Attorney General’s star witness admitted she created a fake Facebook page pretending she was a pro-life Christian to develop dossiers and entrap pro-life sidewalk counselors who appeared in front of the Choices Women’s Medical Center (“Choices”) in New York City’s Jamaica neighborhood. She then passed on the information to the Attorney General’s Office, which was already well aware of her fraudulent activities. 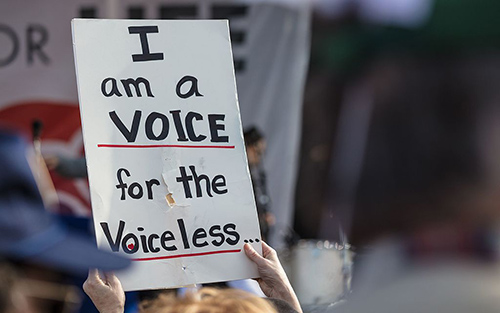 The startling testimony came during a hearing last Thursday (2/15), conducted by U.S.  Federal District Court Judge Carol Bagley Amon, to determine whether she should grant Attorney General Eric Schneiderman’s request for a preliminary injunction prohibiting pro-life sidewalk counselors from coming within sixteen feet of the Choices premises. The hearing before Judge Amon continues tomorrow (2/21), and is expected to last several more weeks.

During last Thursday’s cross-examination by Brooks, the witness admitted creating the Facebook page under the fake name of Shelly Walker. The witness described her elaborate scheme to entrap the unwary pro-life counselors named in the Attorney General’s lawsuit. She went to great lengths to invent an entirely fictitious identity; using someone else’s photo she had found on the internet, listing her occupation as a bank teller and stating she was from Saginaw, Michigan, even posting weather reports from Saginaw, as if she were there.

Moreover, in order to make her Facebook personality of Shelly Walker appear legitimate, she sent out hundreds of friend requests, friending hundreds of pro-lifers throughout the country. She purposely searched out pro-life and conservative groups and even claimed to be a supporter of Ted Cruz and Father Frank Pavone, an ardent pro-life Catholic priest. She fabricated an emotional personal story of being talked into an abortion by her husband, who she later divorced (none of it true).

In real life, she’s a Choices escort leader who is strongly pro-abortion.  She does not share any conservative or pro-life views. Nevertheless, she created this fake persona of Shelley Walker to appear as a concerned pro-life advocate to gather information on and entrap pro-life counselors. In fact, she sent a friend request to Angela Braxton, one of TMLC’s clients in this lawsuit.  Braxton, not realizing this was really one of the Choices escorts, accepted her friend request, thinking Walker was a pro-life advocate like herself.

She also admitted that she shared the information of the targeted pro-life counselors with the Attorney General’s Office.  The Office never told her to stop or to delete the information based on her fraudulent Facebook postings. In fact, the Office outfitted her with a concealed video camera to record pro-life counselors in front of Choices. Ironically, just three weeks ago, in an interview on NPR’s All Things Considered, the Attorney General highlighted his crack-down on fake identities, impersonations and fraud on the internet. Read the transcript of the interview here.

On June 20, 2017, the Attorney General held a press conference in front of the Choices Center where he announced his lawsuit against fourteen pro-life sidewalk counselors, claiming they violated the federal Freedom of Access to Clinic Entrances Act (“FACE”), the New York State Clinic Access Act and City laws. His lawsuit asked the Court to create a sixteen-foot buffer zone around the Choices premises and to levy fines, attorney fees and compensatory damages against the defendants.

During the press conference, the Attorney General boasted that he had dropped out of school at seventeen years of age to work at an abortion clinic in Washington, D.C.  Astonishingly, the Attorney General claimed, “We are not a nation where you can choose your point of view,” and that pro-life Christians “run their mouths” with “unlawful, un-American rhetoric.”

Richard Thompson, TMLC’s President and Chief Counsel, commented upon the courtroom revelations of the Attorney General’s star witness: “I’m appalled at the Attorney General’s lack of respect for the First Amendment and his Offices’ encouragement and use of fraudulent means to obtain information so that he can persecute peaceful pro-life citizens who have become the voice of the voiceless. He has forsaken his responsibilities as an independent law enforcement officer and is now acting as an agent of the abortion industry.”