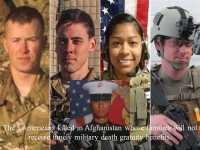 In one of the most despicable and immoral acts of any president in the history of the United States, President Obama, the Commander in Chief, is playing politics over the dead bodies of American soldiers killed in action during the government shutdown. These soldiers were killed following his orders.

Richard Thompson, President and Chief Counsel of the Thomas More Law Center, commented, “I cannot conceive of any other president in our history doing what Obama is doing in this situation.  As Commander in Chief, he signed the orders sending these young men and women into harm’s way.  They died following his orders.  Now he is denying their families the military’s “death gratuity” normally given within 3 days of the death, which covers funeral expenses and travel to Dover Air Force Base to receive the flag draped casket that holds their fallen hero. President Obama is callously adding to the unimaginable grief and the heavy burden these surviving loved ones carrying just to score some political points.” Thompson continued, “The generals in the Pentagon and the combat generals in the field also share in the moral responsibility to our troops. How could they allow this to happen?”

The recently passed Pay Our Military Act should allow for these death gratuity payments.  If the lawyers in the Obama administration say otherwise, Congress must act to quickly overturn this outrageous injustice to our fallen warriors. See if he will veto the bill.  Or he could issue his oft-used Executive Order as Commander in Chief to allow those payments.”

This is the latest optic in the “make it painful policy” his administration is using in his battle with Republicans over the government shutdown.

Sadly, this isn’t the first time the Obama Administration has played politics with the lives of those serving our Nation. Obama and his administration already showed total disregard for the WWII Veterans attempting to visit the WWII Memorial.

In Benghazi, for the sake of Obama’s re-election rhetoric, the Obama Administration issued “stand down” orders, offered no intervention and no reinforcements; actions that resulted in the death of 4 Americans including Ambassador Chris Stevens and 2 former Navy SEALS. A year later, the administration is still wrapped up in the politics of that incident.