On Monday (6/27), in the case Whole Woman’s Health v. Hellerstedt, the U.S. Supreme Court, in a 5-3 decision, struck down a Texas law that ensured abortion facilities are clean and safe.  Justice Kennedy, a Republican appointee, sided with the four Democrat appointees on the Court.  The Court’s decision was a debilitating blow to women’s health care and continued the Court’s history of pandering to pro-abortion groups that prey on women in crisis. 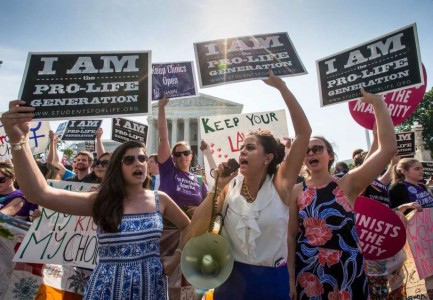 The ruling forces women seeking abortions to receive below-standard health care by allowing abortions facilities to circumvent the minimum standards of care required for other surgical facilities simply because their product is abortion.

“In effect, the Court has given abortionists a constitutional right to increase their profit margin by providing second-class healthcare to women. We must rise to the challenge of protecting women from this profit seeking industry that preys upon women and makes a mockery of the women’s rights movement.”

In 2013, Texas passed new legislation “enacted to raise standards of care and ensure the health and safety of all abortion patients.” This legislation, House Bill 2 (“HB2”), included two provisions challenged up to the Supreme Court:

A group of abortion providers challenged these provisions as too costly, arguing many abortion providers would close down.   The Supreme Court bought their argument.  It held that easy abortion access is more important than safe abortion procedures done by competent doctors with local hospital privileges.

Here are some of the standard Texas surgical-center requirements that the Court felt women receiving surgical abortions do not deserve:

Quoting the recently departed Justice Scalia, Justice Thomas chastised the majority in his dissent for “bend[ing] the rules when any effort to limit abortion, or even speak in opposition to abortion is at issue.”  Justice Thomas noted, today’s decision “will surely mystify lower courts for years to come.”

“The Court marginalizes itself as it repeatedly fabricates new legal standards that are not found in the Constitution to reach the ideological results it wants. This is especially clear with the decisions surrounding the Court-created right to abortion.”

In the wake of this decision, abortion advocates are already plotting to minimize the quality of healthcare for women across the country by filing new lawsuits challenging health and safety provisions in numerous other States.