There is little more profoundly American than the concept that we are a nation of duly enacted, just laws. Monday’s Supreme Court decision not to hear cases regarding so-called same-sex marriage, however, turns this concept on its head in two ways. First, the decision undermined the fundamental basis of a democracy—that laws reflect the will of the majority. Secondly, today’s ruling robbed parties and states of their day in court. 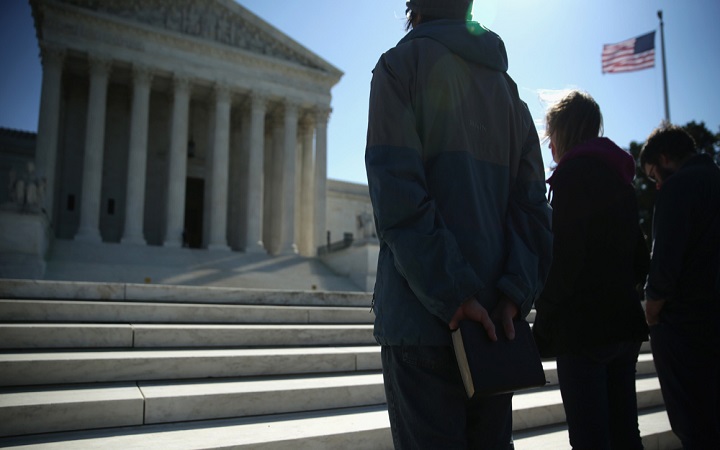 The Supreme Court’s actions involved cases from Utah, Oklahoma, Wisconsin, Indiana and Virginia. Each state had on the books a constitutional amendment that defined marriage as exclusively between one man and one woman. Same-sex couples living in each of these states and wishing to marry brought legal challenges, arguing that such strictures violate their constitutional rights to equal protection under the law. The plaintiffs also based their claims on several prior Supreme Court decisions, including one from last term that struck down a provision of the Defense of Marriage Act and another—1967’s Loving v. Virginia—in which the justices invalidated a Virginia law that prevented blacks and whites from marrying.

The plaintiffs first brought their challenges in federal trial courts in their own states, and prevailed. Had the litigation stopped there, those rulings would only be binding within each state. But that wasn’t the end. Each trial court ruling was then appealed to the next rung of federal appeals courts by state officials tasked with defending state laws.

The United States is partitioned into 13 different federal circuit courts of appeal, with jurisdiction over specific geographic areas. So, for example, the challenge to Virginia’s one man-one woman law amendment was heard by a federal appeals court with jurisdiction over not only Virginia, but also Maryland, West Virginia and North and South Carolina. What the appeals court decides becomes the law of the land in every state within the circuit.

In each case, the courts of appeals struck down these marriage amendments. By declining to wade into the matter and ultimately decide the issue, the Supreme Court left these rulings intact. And this means that Colorado, Wyoming, Kansas, West Virginia and North and South Carolina—all of which have marriage amendments, but were not parties to this particular litigation—will now be forced to live under the rulings.

Most of those states are involved in cases to defend traditional marriage in either the district court or appellate level. Those states, however, will never have the opportunity to defend and justify their duly enacted laws before the Supreme Court’s nine justices, even though their marriage amendments passed by large majorities: 70 percent in Kansas and 78 percent in South Carolina, for instance. But the Supreme Court effectively took the decision out of the voters’ hands.

Although Monday’s decision effectively strikes down marriage amendments defining marriage, it is not a clear victory for those fighting against the will of the majority. In fact, neither side of the issue can declare victory yet. We are currently awaiting decisions from the Cincinnati-based federal appeals court and the New Orleans-based court of appeals. Those cases are still viable, and the Supreme Court could still decide to take up a case on this issue. Those present during oral argument in the Sixth Circuit are hopeful that that the panel of judges who heard the case will continue to allow states to define marriage for themselves, instead of adopting one federal definition. But until then, if you are among the 78 percent of voters in South Carolina who do not want marriage to be redefined and seek the preservation of the natural family, it is a bad day to be a South Carolinian. Not only is the voice of the vast majority from your state not being heard, but you will not have a chance to litigate your arguments before the highest court. The Supreme Court has silenced your voice.