ANN ARBOR, MI – On Tuesday morning the U. S. Supreme Court will hear oral arguments in the monumental same-sex marriage cases stemming from the U.S. Sixth Circuit Court of Appeals decision that upheld constitutional amendments passed by overwhelming majorities of voters in the states of Michigan, Ohio, Tennessee, and Kentucky defining marriage as a union of one man and one woman. 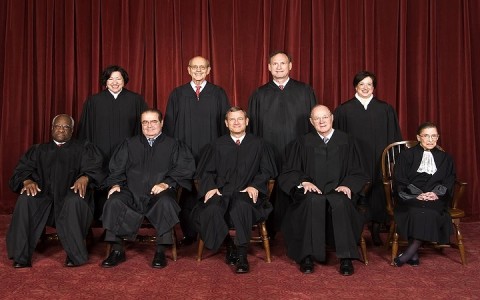 Tuesday’s Supreme Court arguments will focus on two questions: whether bans on gay marriages are constitutional; and, if they are, whether states with bans may refuse to recognize out-of-state gay marriages performed where they are legal. Most Court watchers believe that Justice Kennedy will be the swing vote in a decision that will overturn the state amendments.  However, Justice Kennedy’s opinion in Shuette v. Coalition to Defend Affirmative Action, which upheld the vote of the people to decide sensitive issues, should be of concern to those in favor of gay marriage.

Like most of the states that have passed constitutional amendments upholding traditional marriage before the voters, the amendments under consideration by the Court were passed by overwhelming majorities of voters: fifty-nine percent in Michigan; seventy-four percent in Kentucky; sixty-two percent in Ohio; and eighty percent in Tennessee.

Although the media continues to report that gay marriage is legal in 36 states, they fail to report that in most of those instances single life-time appointed federal judges overruled the vote of the people supporting traditional marriage.

The Thomas More Law Center (TMLC), a national, nonprofit public interest law firm based in Ann Arbor, MI has been on the front lines defending traditional marriage.   TMLC filed an amicus brief (friend of the court brief) in tomorrow’s case in the U.S. Supreme Court on behalf of the National Coalition of Black Pastors and Christian Leaders (Coalition).  This is the seventh brief the Law Center has filed in its fight to preserve traditional marriage and in opposition of marriage redefinition.  It also played a significant role in crafting Michigan’s constitutional amendment defining marriage as the union between a man and a woman.

Richard Thompson, the TMLC’s President and Chief Counsel expressed his concerns should the Supreme Court strike down laws passed by the voters. He stated: “Striking down state laws which define traditional marriage will be the worst example of judicial activism since Roe v. Wade.  Abraham Lincoln said, ‘that if the policy of the government upon vital questions affecting the whole people is to be irrevocably fixed by the decisions of the Supreme Court . . . the people will have ceased to be their own rulers.’”

Continued Thompson, “Faithful Christians will not abandon their faith regardless of what the Supreme Court decides.  We have already witnessed attacks on Christian shop owners and businesses, pastors and private citizens who donate to groups advocating for traditional marriage.  Those attacks are intramural compared to the persecution that will unleashed by militant homosexual groups and their lawyers if gay marriage is legalized in all 50 states.  So a decision in favor of gay marriage, like Roe v. Wade, will not end the controversy, but will merely change the battleground and specific issues.”

TMLC’s Supreme Court brief is the pinnacle filing in its efforts to stop the judge-led onslaught to redefine marriage by ignoring well-established precedent, and thwarting the will of the overwhelming majority of voters.  TMLC’s efforts have involved forming a legal team consisting of TMLC’s senior trial counsel, Erin Mersino, and Co-counsels William R. Wagner and John S. Kane of Lansing, MI.

Erin Mersino stated, “The National Coalition of Black Pastors’ viewpoint is one not often reported in the media.  The pastors were able to share with the Law Center first hand experiences, and the brief captures their unique voice.”

Stacy Swimp, a spokesperson for the Coalition stated, “Wherever so-called sexual orientation has falsely become a legal ‘civil right,’ the constitutional rights of Christians to freedom of speech and freedom of religion have been effectively denied by government. God help us.”

Coalition member, Bishop Samuel Smith of the Apostolic World Christian Fellowship consisting of 25,000 churches worldwide representing over 5 million laity stated: “Every once in a while the homosexual agenda makes an effort to redefine morality, but history tells us, that every culture that has embraced the homosexual culture has suffered decadence, depravity, and decline.”

Pastor Danny Holliday, another member of the Black Pastor’s Coalition, stated, “The Supreme Court was wrong on the subject of slavery!  Blacks were redefined as property to justify slavery. Gay persons have never been considered nonhuman. In fact, gays could have owned blacks.  The immutable issue of being born black is very unlike deciding to become gay or straight.”

Evangelist Janet Boynes, a former lesbian and a member of the Coalition expressed her concerns: “If the Supreme Court makes same-sex marriage the law of the land, this false concept will be taught to our youngest children in the public schools. It will infiltrate the school curriculum in every subject matter. Traditional marriages create healthy societies. Same-sex marriages do not.”

“Comparing the dilemmas of same-sex couples to the centuries of discrimination faced by Black Americans is a deceptive distortion of our country’s culture and history. The disgraces in our nation’s history pertaining to the civil rights of Black Americans are unmatched. No other class of individuals, including individuals who are same-sex attracted, have ever been enslaved, or lawfully viewed not as human, but as property.”

“The Sixth Circuit properly recognized that “[i]t is not society’s laws or for that matter any one religion’s laws, but nature’s laws (that men and women complement each other biologically), that created the policy imperative.”

“There is no surer way to destroy an institution like marriage than to destroy its meaning.  If ‘marriage’ means whatever a political activist, a cherry-picked plaintiff, or a politically unaccountable appointed judge wants it to mean, it means nothing.  If it has no fixed meaning, it is merely a vessel for an unelected judge’s will.  It is a subterfuge for judicial legislation.  And as Montesquieu observed: ‘There is no greater tyranny than that which is perpetrated under the shield of law and in the name of justice.’”

“Finally, we protest Petitioners’ (homosexual marriage proponents] attempt to equate this case to Loving under the banner of ‘marriage equality.’  Petitioners essentially claim that their proposed redefinition improves marriage by adding a necessary element of ‘equality’ to it.  This is certainly a clever ploy, for who can oppose equality?  But that is all that it is, a ploy.  It is not a valid point.”

“Marriage already has all the equality it can contain without destruction of its meaning, purpose, and proper boundaries.  Any legally competent man can marry any legally competent woman, regardless of his or the woman’s race, religion, national origin, or even sexual preference, and vice versa.  The problem Petitioners claim this Court must resolve is one that does not exist.  True marriage equality already exists.”

“What Petitioners actually seek is not equality but instead a self-indulgent form of inclusiveness that demands acceptance, and indeed support, of a wide variety of sexual conduct.  And once Petitioners’ inclusiveness camel gets its nose in the marriage tent, marriage will not be a better tent; it will be trampled and destroyed.”