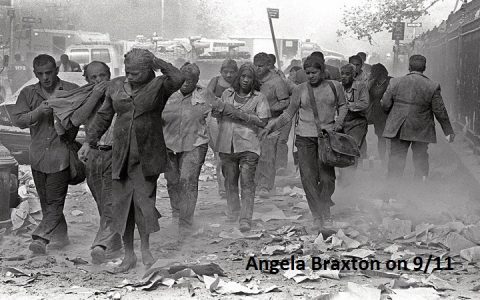 Ms. Braxton, whose iconic photo as a survivor of the 9/11 World Trade Center Terrorist Attack hangs in the Smithsonian National Museum of African American History and Culture, is one of fourteen pro-life sidewalk counselors sued by the Attorney General who alleges they harassed and intimidated women at the entrance of an abortion facility, Choices Women’s Medical Center, in Jamaica, New York.

The Attorney General petitioned the Court to create a sixteen-foot buffer zone around the abortion premises and levy fines, attorney fees and compensatory damages against the defendants.

Braxton, who did not consider herself very spiritual at the time, had a life-changing experience on 9/11 when the first plane struck while she was on the 80th floor of World Trade Center 1. Looking back on that fateful day, Angela recalls:

“I went about my daily business.  I never thought about where I would spend eternity or if this would be my last day.  Twenty-four hours later I begged a God I did not love, did not thank, did not think about, did not serve nor bring glory to, not to let me die.” 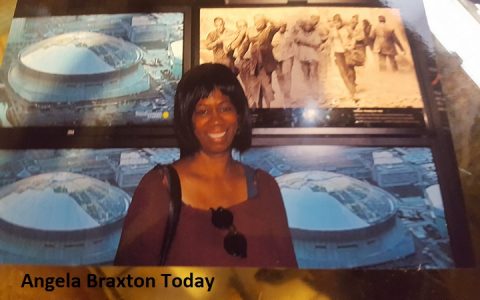 She did not die.   A few years later she fully committed herself to Jesus Christ and the pro-life cause.

“The Attorney General of New York, by his own admission, is so driven by the pro-abortion agenda that he recounted at his press conference announcing the lawsuit that he dropped out of school at 17 years of age to work at an abortion clinic in Washington, D.C.  Now, as New York’s Attorney General, he has chosen to bring the full weight of his office to persecute pro-life advocates.

Angela Braxton is a prayerful, peaceful, sidewalk counselor who compassionately speaks to women as they approach the abortion clinic.  After years of investigation, the Attorney General’s lawsuit against Angela Braxton could not name a single person who was ever harassed.  This is because it simply did not happen.”

Rather than fulfill his duty as Attorney General to protect the First Amendment rights of Angela Braxton, the Attorney General, in his press conference, lamented what he called “a sense of entitlement by protestors to run their mouth.”    This chilling statement shows that the New York Attorney General is so blinded by his desire to see abortions performed that he has forgotten that the “entitlement” to speak on behalf of the lives of unborn children is a constitutional right protected by the First Amendment.