ANN ARBOR, MI –  The Thomas More Law Center, a national public interest law firm based in Ann Arbor, MI, on Friday (11/17/17), filed a federal lawsuit against the City of Charlotte, North Carolina, the mayor, and several city employees to stop the City’s unconstitutional censorship, intimidation, and harassment of peaceful pro-life advocates. The lawsuit was filed on behalf of Cities4Life, a Christian pro-life ministry, and its Executive Director, Daniel Parks, in the U.S. District Court for the Western District of North Carolina. 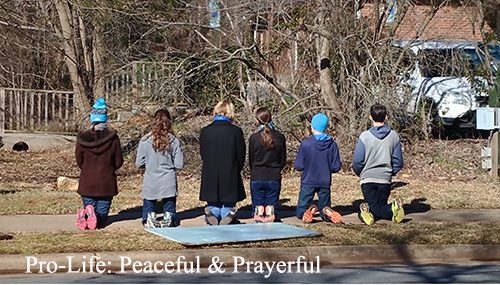 For over a decade, Cities4Life volunteers have peacefully assembled outside of Charlotte’s busiest abortion facility to pray and provide faith-based pro-life counseling for mothers seeking an abortion. However, responding to pressure from pro-abortion groups, the City of Charlotte has recently acted to silence this pro-life message by using an ordinance that unconstitutionally discriminates against signs based upon their content. In July of this year, City officials began enforcing the ordinance in a discriminatory manner so as to target the activities of pro-life religious groups, but not those of pro-abortion organizations.

Since July, Daniel Parks has been issued at least 4 citations by the City alleging a violation of the ordinance.

Tyler Brooks, the TMLC attorney handling the case, commented: “The City of Charlotte and its code enforcement officials have used the City Code to violate the First Amendment by restricting Cities4Life’s use of signs, and therefore its speech, because they object to the content of those signs. Thus, despite their desire to exercise their constitutional rights and speak freely, Cities4Life and its volunteers have encountered unconstitutional censorship.”

Cities4Life, headquartered in Concord, North Carolina, has chapters in Nashville, Tennessee; Tampa Bay, Florida; and Lexington, Kentucky as well as other parts of the country. David Benham, of Benham Brothers fame, is Founder and Chairman of the Board of Cities4Life. Cities4Life’s approach is peaceful, prayerful, and non-violent as it seeks to demonstrate the love of Jesus Christ, clearly seen in this video (5 minutes).

Richard Thompson, President and Chief Counsel of the Thomas More Law Center, commented: “This is the second pro-life lawsuit we’ve filed in the past month.  Despite the many pro-life victories in recent years, pro-abortion forces, which control the government in many large cities, have waged a guerrilla war against courageous pro-life advocates, like Cities4Life, who are engaged on the front lines of the battle. Cities like Charlotte are using their law enforcement powers to silence the voice of these pro-life warriors.”

The complaint asks the federal court to declare the City’s ordinance unconstitutional and to permanently enjoin its enforcement.