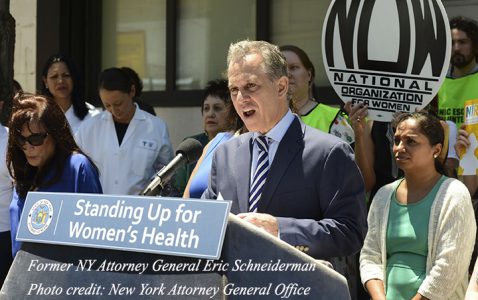 Last summer, June 20, 2017, at a much-ballyhooed press conference held outside Choices, then-Attorney General of New York Eric Schneiderman (who later resigned amid allegations of sexual misconduct), concluding a massive year-long investigation, announced his federal lawsuit against thirteen sidewalk counselors with the astonishing remark that this is “not a nation where you can choose your point of view.”

Tyler Brooks commented, “A radical state attorney general abandoned his duty to enforce the law fairly in favor of pursuing an ideological campaign intended to silence pro-life Christians. The federal court, however, has seen through the State of New York’s efforts and made clear that the free speech of Christians will not be censored simply because some people on the left do not like it.”

Kate Oliveri added, “In denying the State’s preliminary injunction motion, the district court judge protected the true victims of harassment: the pro-life sidewalk counselors. Judge Amon sent a clear message to the New York Attorney General’s Office that the First Amendment does indeed guarantee the right of citizens in New York to have their own viewpoint.”

Richard Thompson, TMLC President and Chief Counsel praised the great cooperation between TMLC attorneys and attorneys associated with the Thomas More Society and Liberty Counsel, who represented the other Defendants.

In its lawsuit, OAG alleged that the thirteen sidewalk counselors violated federal, state and New York City laws prohibiting the obstruction of abortion facilities, and harassment and intimidation of women who were seeking abortions. It petitioned the federal court to create a sixteen-foot buffer zone around Choices abortion premises and levy fines, attorney fees and compensatory damages against the Defendants.

An extensive preliminary injunction hearing was held between February 12 and March 6, 2018. In addition to videos, photographs and other documentary evidence, OAG called seven witnesses and the Defendants called ten witnesses. On May 22, 2018, Judge Amon heard oral arguments on OAG’s motion for a preliminary injunction. In her 103-page opinion and order, Judge Amon denied the OAG’s motion finding that the OAG had failed to substantiate any of its allegations against the Defendants.

For years, Choices has had security cameras trained on its entrance. And in June 2016, the OAG installed a high-mounted surveillance camera to capture the exterior of Choices’ main patient entrance surrounding sidewalk. Moreover, OAG investigators obtained additional video evidence in undercover operations where they approached Choices, pretending to be patients and their companions, while wearing hidden cameras recording video and audio.

Despite these investigative activities, Judge Amon found that not a single video introduced into evidence substantiated the OAG’s allegations against the sidewalk counselors.

The Court also heard testimony from several Choices employees and escorts, including Merle Hoffman, the owner of Choices who proudly accepts the title “Millionaire Abortionist” and who has said that pro-life advocates should be considered the “American Taliban.” Judge Amon found the witnesses produced by the OAG were not credible.

OAG can appeal Judge Amon’s decision to the U.S. Court of Appeals for the Second Circuit. However, the appellate court is required to defer to the findings of fact made by Judge Amon, making any such appeal very difficult for the State.