The North Dallas Chapter of Overpasses for America and its leader Valerie Villarreal, yesterday, obtained a federal court consent judgment against the City of Dallas, Texas, which declared that the Dallas city ordinance prohibiting demonstrations on city overpasses violated their constitutionally protected First Amendment rights. 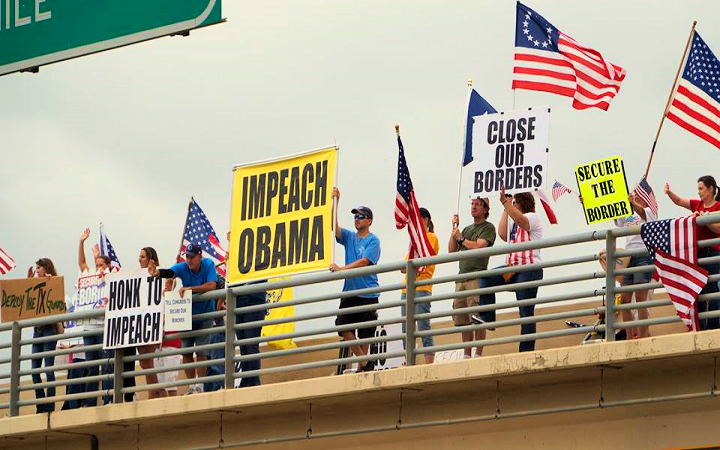 The Thomas More Law Center (TMLC), a national public interest law firm based in Ann Arbor, Michigan, filed a federal lawsuit on behalf of the plaintiffs in August 2014, challenging the enactment of the ordinance which restricted the plaintiffs’ right to demonstrate and display signs calling for the impeachment of President Obama and the end to illegal immigration on city overpasses over designated highways.

U.S. District Judge David Godbey for the Northern District Court of Texas entered the consent judgment, marking the first time that the City of Dallas admitted its ordinance was an unconstitutional restriction on freedom of speech and freedom of assembly.

Erin Mersino, TMLC Senior Trial Counsel handling the case, commented, “It is a good day for free speech. Overpasses for America and Valerie Villarreal may now resume their important demonstrations without fear of being fined or retaliated against by the City.”

In November 2014, just three months after TMLC filed their initial lawsuit against the city, the Dallas City Council voted to repeal the ordinance. During the repeal process, however, the City refused to acknowledge that the ordinance unconstitutionally attacked Free Speech that criticized President Obama and the flood of illegal immigration encouraged by the Obama administration’s complete disregard of federal immigration laws. The judgment entered by the District Court, however, specifically declares that the Dallas ordinance was a violation of Overpasses for America’s First Amendment rights to free speech and free assembly. The judgment also awarded nominal damages as requested by the Plaintiffs in recognition of the City of Dallas’ violation of the Overpasses members’ Free Speech and Freedom of Assembly rights, and provided a settlement amount for attorneys’ fees and costs.

Before the enactment of the City’s ordinance, the North Dallas Chapter of Overpasses for America had held over 75 demonstrations on the pedestrian overpasses in Dallas, without a single traffic incident. Nevertheless, the City Council moved forward with the restrictive ordinance under the guise that it was necessary for public safety.

Overpasses for America is a nonpartisan grassroots movement that calls for accountability among our nation’s leaders. Overpasses for America demonstrators frequently use pedestrian overpasses to spread their messages and to reach a large and diverse audience. Several cities, however, have sought to silence these concerned citizens.

Richard Thompson, President and Chief Counsel of TMLC, stated: “The concerns of a majority of Americans on crucial public issues have little impact on the Washington political establishment. That’s why it’s so important to defend the free speech rights of grassroots organizations like Overpasses for America, whose members feel it’s their patriotic duty to get their message out and mobilize their fellow citizens.”

TMLC is currently representing two plaintiffs in a case challenging a similar ordinance in the Town of Campbell, Wisconsin—that case is currently pending before the U.S. Seventh Circuit Court of Appeals.