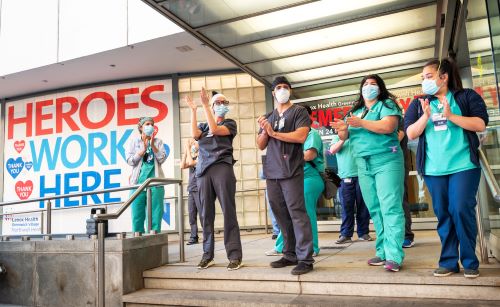 Nevertheless, an ungrateful state government, which permits secular exemptions from the vaccine mandate, disallows any consideration for religious accommodations.  These healthcare workers share sincerely held religious beliefs that prevent them from obtaining the presently available COVID-19 vaccines.  Many have recovered from COVID-19 and have antibodies to the illness.  All have faced persecution and scorn for their religious beliefs on this issue.

Erin Mersino, TMLC’s Chief of Supreme Court and Appellate Practice authored the brief.  She highlighted the precarious position of New York’s Governor Hochul—who instructed New Yorkers that “God wants” everyone to use these vaccines, and that individuals who have decided not to undergo COVID-19 vaccination “aren’t listening to God and what God wants.”  Governor Hochul published these statements on New York’s official state website.  (https://www.governor.ny.gov/news/rush-transcript-governor-hochul-attends-service-christian-cultural-center).

Since the Governor claims to be the authority on what God wants, she removed all religious accommodations from the vaccine mandate.  However, many individuals sincerely hold religious beliefs that prohibit them from using the three COVID-19 vaccines on the market today and call for alternatives that have no connection to aborted fetal cell lines.  The Governor failed to consider the spectrum of diverse religious views allowed under the Free Exercise Clause of the First Amendment.  The brief explains that such an exercise of authority from the State endangers the principle of pluralism upon which our nation is built and ignores our constitutionally protected autonomy to make such religious determinations for ourselves.  TMLC explains in the brief that “The mandate is premised on the false presupposition that the Governor can use the powers of the State to answer theological questions pertaining to religious conscience.”

TMLC also highlights the unequal and punitive nature of New York’s mandate.  New York decided to exempt individuals from its vaccine mandate for secular purposes, but intentionally left off an exemption for a religious purpose.  TMLC contends this double standard violates the Constitution.  Lastly, the brief addresses New York’s decision to withhold unemployment benefits to healthcare workers who lose their jobs due to their religious opposition with New York’s mandate.  This additional punishment adds insult to injury.

In the brief, TMLC remarks, “The severity with which New York’s vaccine mandate treats religious objectors is so extreme that it almost seems implausible.  The undisputed record, however, presents statement after statement from [New York’s Governor] establishing that no cause for such denial exists—it really is as bad as it seems.”

TMLC’s Amicus Curiae brief,  which urges the U.S. Supreme Court to accept the case at the earliest possible time to protect the religious freedom of New York’s healthcare workers and to prevent other states from enacting similar mandates, can be found here.