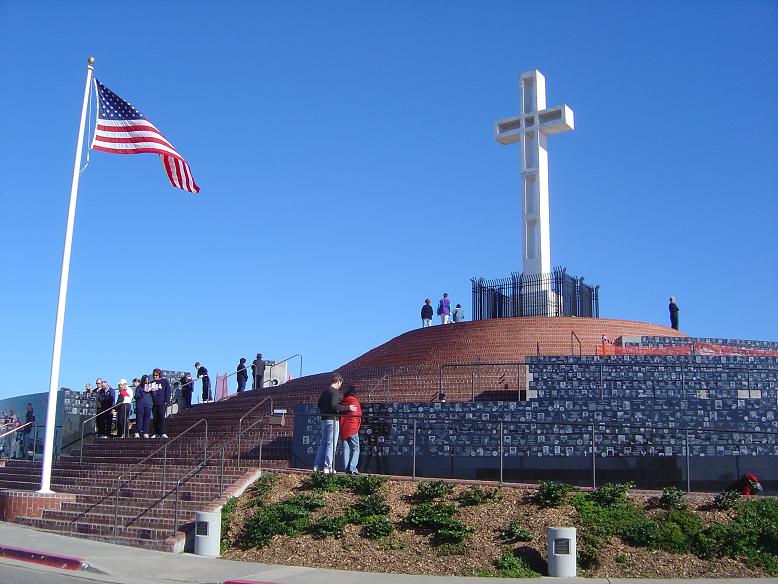 ANN ARBOR, MI – In July 2008, the Honorable Larry Alan Burns, a federal district court judge in Southern California, dismissed the ACLU’s latest lawsuit to tear down the historic Mt. Soledad cross, which is part of a national memorial honoring the veterans of the U.S. armed forces.  Not surprisingly, the ACLU appealed that ruling to the U.S. Court of Appeals for the Ninth Circuit.  When the appellate court considers the case, however, it will have in its file a compelling brief supporting the Mt. Soledad cross filed by the Thomas More Law Center.   Click here to see brief.

The Law Center’s friend of the court brief was filed on behalf of former Navy pilot and prisoner of war Rear Admiral Jeremiah Denton, USN (Ret.), and the families of Marine Majors Michael D. Martino and Gerald Bloomfield, III, both of whom were killed in combat in Iraq on November 2, 2005, when their attack helicopter was shot down by a surface-to-air missile.  The memories and sacrifices of these war heroes are now preserved by plaques located under the Mt. Soledad cross.  The plaques were dedicated in their honor.  Click here to see photographs.

Richard Thompson, the President and Chief Counsel for the Law Center, commented, “Through our brief and the compelling stories of these war heroes, we want the court to feel the devastating impact removing the cross will have on those who have sacrificed so much for this country.  Ironically, the ALCU wants to use the very constitution these veterans protected with their lives to eliminate the memory of their heroic sacrifices.”

Jeremiah Denton is a retired U.S. Navy Rear Admiral, a veteran of World War II, Korea, and Vietnam; a former prisoner of war from July 18, 1965 to February 13, 1973; and a former U.S. Senator from the State of Alabama.  Admiral Denton first came to the attention of the American public during a television interview arranged by his North Vietnamese captors in 1966.  Expected to give “proper responses” to a journalist’s recitation of alleged American war atrocities, Admiral Denton affirmed his faith in his government’s position, stating, “I will support it as long as I live.”  While responding to questions from his interrogator, Admiral Denton blinked his eyes in Morse Code, repeatedly spelling out the covert message “TORTURE.”  His message was the first confirmation that American POWs were being mistreated.

During his nearly eight years as a POW, Admiral Denton was subjected to severe torture.  He became the first American military captive to be subjected to four years of solitary confinement.  Admiral Denton’s extraordinary account of his endurance and sacrifice for our country while imprisoned in North Vietnam was told in his 1976 book, When Hell Was in Session.

After his release in 1973, Admiral Denton continued his military career, ultimately achieving the rank of Rear Admiral.  Upon retirement from the Navy, Admiral Denton was elected to the U.S. Senate, becoming the first Republican ever elected by the popular vote to represent Alabama.

In 2008, Admiral Denton’s incredible sacrifice for our country – a horrific sacrifice that is unimaginable to most Americans, including most war veterans – was honored and memorialized at the Mt. Soledad Veterans Memorial.  A plaque in his honor was placed at the veterans’ memorial during a ceremony held on September 19, 2008, the 2008 National POW/MIA Recognition Day.

Previously, in May 2006, Major Martino and Major Bloomfield’s unit, which had recently returned from Iraq, sponsored a plaque-dedication ceremony at the memorial to commemorate the fallen Marines’ heroic service and to provide a place to honor them.  More than three hundred Marines stood in line in the hot sun for over three hours to meet the Marines’ families and to pay respect for their fallen comrades.

These plaque-dedication ceremonies reveal that this memorial is a lasting tribute to our servicemen and servicewomen.  It provides a place where family members, friends, and comrades of our war veterans can pay tribute to their heroes’ sacrifices.  Consequently, the memorial, including the cross, conveys an unmistakably American message of patriotism and self-sacrifice; it does not “establish” Christianity as a national religion, as the ACLU contends.

In 2004, the Law Center stepped in and defended the cross just weeks before it was to be taken down pursuant to an agreement between the City of San Diego and a self-proclaimed atheist who was seeking to remove it.  From that point on, the Law Center, with assistance from its West Coast Regional Director, Charles LiMandri, has played a significant role in defending the cross.  The Law Center ultimately prevailed in both the state and federal courts, which included an emergency appeal to the U.S. Supreme Court, by successfully petitioning the federal government to transfer the cross from city to federal property, thereby rendering a district court’s order to remove the cross moot.  However, the ACLU soon thereafter filed a new lawsuit, this time against the federal government, claiming the transfer was improper and that the display of the memorial cross as part of this veterans’ memorial violated the so-called “wall of separation of church and state.”  The lawsuit was dismissed in July 2008, prompting the ACLU to file this appeal to the Ninth Circuit.

Federal government lawyers are defending the cross in this appeal.  However, the Law Center is supporting their efforts by adding a new perspective to the legal arguments – the importance of this veterans’ memorial to those who have sacrificed the most for our nation.

Robert Muise, the Thomas More Law Center attorney who authored the brief, is a former Marine officer himself.  Said Muise, “Our brief demonstrates that tearing down the memorial cross will cause real, irreparable harm to our war heroes and their grieving families, as compared with the contrived ‘harm’ the ACLU will ‘feel’ because the memorial cross remains.  Indeed, it is the ACLU in this case that is creating the sort of religiously-based divisiveness that our Constitution was designed to prohibit.”

The Mt. Soledad cross is the centerpiece of a world class veterans’ memorial.  Over 2,100 plaques honoring individuals or groups of veterans are displayed at the memorial.  Some of the plaques contain Stars of David, honoring Jewish veterans.  There is also a large American flag flying at the base of the memorial.  In a letter to the private association that maintains the memorial, former President George W. Bush stated, “Mount Soledad becomes a place to reflect on our past, be inspired by true patriots, and offer war veterans our heartfelt gratitude for the freedom we all enjoy today.”

The Thomas More Law Center defends and promotes America’s Christian heritage and moral values, including the religious freedom of Christians, time-honored family values, and the sanctity of human life.  It supports a strong national defense and an independent and sovereign United States of America.  The Law Center accomplishes its mission through litigation, education, and related activities.  It does not charge for its services.  The Law Center is supported by contributions from individuals, corporations and foundations, and is recognized by the IRS as a section 501(c)(3) organization.  You may reach the Thomas More Law Center at (734) 827-2001 or visit our website at www.thomasmore.org.