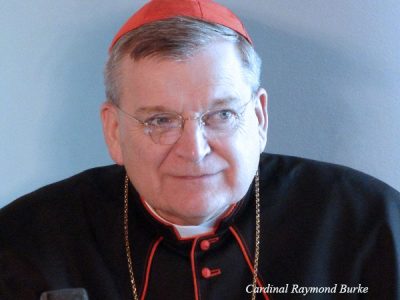 “During these difficult times in which we are living, in which secularization has ravaged the culture of our homeland, alienating culture from its only true source in God and His plan for the world, the Thomas More Law Center provides a most important service for the restoration of Christian culture by promoting the sanctity of human life, defending religious liberty, and protecting the good of the family. Through the intercession of its holy patron, may the Thomas More Law Center courageously continue to serve the true good of our beloved homeland of the United States of America.”

Thompson commented, “We are deeply honored and profoundly grateful to Cardinal Burke for his uncompromising defense of America’s traditional Judeo-Christian culture and moral values, and for his unprecedented endorsement of the Thomas More Law Center.”

In June 2008, Pope Benedict XVI appointed Cardinal Burke as the Prefect of the Supreme Tribunal of the Apostolic Signatura, the Holy See’s highest court. He was the first American named to head the Tribunal and became the second highest ranking prelate at the Vatican.  However, in 2014 he was removed from that position by Pope Francis.

Regarded as a leading traditionalist within the Church, Cardinal Burke is a courageous and outspoken defender of the Catholic Faith and the Gospel of Jesus Christ.

Cardinal Burke’s views on key issues facing American culture and Western Civilization, are shared by the Thomas More Law Center and traditional Christians of all denominations.

“It is clear that Muslims have as their ultimate goal conquest and power over the world.”

“Islam, through sharia, their law, will rule the world and permit violence against infidels, such as Christians.  But we find it hard to recognize this reality and to respond by defending the Christian faith.”

“Many people do not understand what Islam really is.  They created these slogans: we all believe in the same God, we are all united by love and so on.  It’s not true.”

“. . . is a work of deceit, a lie about the most fundamental aspect of our human nature, our human sexuality, which, after life itself, defines us. There is only one place these types of lies come from, namely Satan. It is a diabolical situation which is aimed at destroying individuals, families, and eventually our nation.”

In a March 2, 2009 Interview with the founder of ‘Operation Rescue’, Cardinal Burke stated:

“The service of the Church in the world of today has to begin first and foremost with the protection of the life of those who are the most defenseless and the most innocent, namely the unborn.”

“We recognize in that decision of the highest court of our nation a rebellion against God and His Law written upon every human heart in its first and most fundamental tenet: to safeguard and to foster human life from the moment of conception to the moment of natural death.”

In March 2009, Burke called on American bishops to withhold the Eucharist from Catholic politicians who support legalized abortion. The bishop’s failure to do so, Burke said, “is weakening the faith of everyone. It’s giving the impression that it must be morally correct to support procured abortion.”