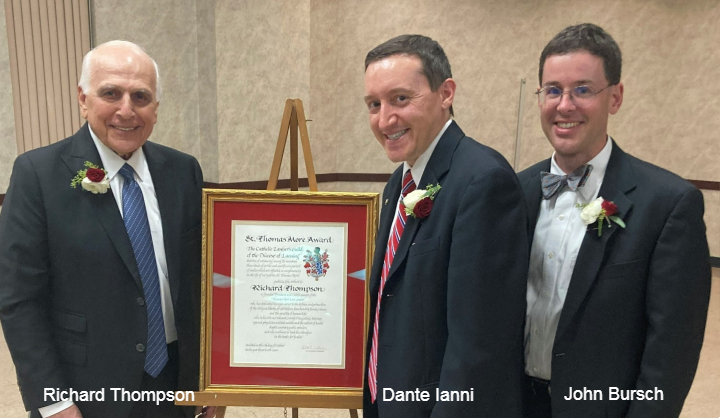 The Catholic Lawyers Guild of the Diocese of Lansing, MI, this past week, presented Richard Thompson, president of the Thomas More Law Center (TMLC), with its annual St. Thomas More Award. This distinguished honor is presented to the attorney in 2021 who best exemplifies the values of Saint Thomas More.

Dante Ianni, the current president of the Catholic Lawyers Guild, presented the award following the Red Mass and dinner.

In his after-dinner remarks to the audience of judges, lawyers and government officials, Thompson offered as a guide in their daily work, the famous statement of Thomas More as he stood on the scaffold waiting the executioner’s axe, “I die the King’s good servant, but God’s first.”

Some of the other awards that Richard Thompson has received throughout his legal career for his pro-life efforts, include:

The Red Mass has been celebrated annually by the Catholic Church since 1245 at the opening of the judicial year. Its purpose was to ask the Holy Spirit for guidance for all who seek justice including judges, lawyers, law school professors and law students and government officials.

It was first celebrated in the United States in 1877, at Sts. Peter and Paul Church in Detroit by what is now known as the University of Detroit Mercy.