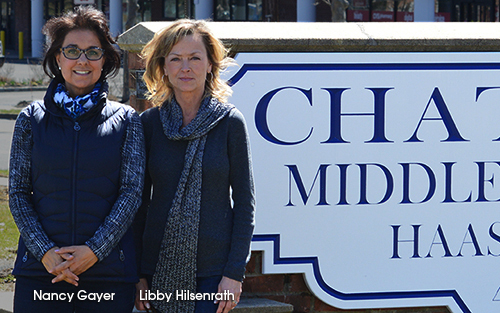 Astonishingly, seventh graders in this public school are taught: “May God help us all find the true faith, Islam.”

Richard Thompson, President and Chief Counsel of the Thomas More Law Center, commented: “The promotion of Islam is worse than what the mothers presented to Tucker Carlson. After viewing one of the videos which the seventh graders were directed to watch, I can’t imagine any objective person saying this is not Islamic indoctrination. Clueless school administrators across our nation are allowing this type of indoctrination to take place and it’s up to vigilant parents to stop it. Libby and Nancy should have been praised, not pilloried.”

[See excerpts from the video here]

Libby Hilsenrath and Nancy Gayer, with sons in different classes in the seventh grade, detailed their concerns in person to the Chatham Board of Education at their February 6, 2017 public meeting. Superintendent Michael LaSusa indicated that any change to the curriculum was unlikely, and the next day also refused their request to meet privately with him to discuss their concerns.

Students had been shown a subtle propaganda cartoon video, 5 Pillars, which opens with two boys, one of them a Muslim, kicking a soccer ball. The Muslim teaches the non-Muslim the 5 Pillars of Islam. Additionally, a subtitle of bright, multi-colored words of various shapes pronounces a form of the Islamic conversion creed: “There is no god except Allah and Prophet Muhammad is His messenger.” The cartoon ends with a sad non-Muslim boy, who suddenly smiles when the Muslim boy invites him to join him at the mosque for noon-day prayers. Something the teacher can’t personally do, but does through the cartoon. Clever!

Clearly, seventh graders had been presented with a sugarcoated, false depiction of Islam. They had not been informed of the kidnappings, beheadings, slave-trading, massacres, and persecution of non-Muslims, nor of the repression of women — all done in the name of Islam and the Koran.

Libby Hilsenrath and Nancy Gayer were subjected to personal attacks throughout their campaign to stop Islamic indoctrination at the Chatham Middle School. They were defamed as “bigots” and “Islamophobes”, “hateful”, “ignorant”, “xenophobes”, “intolerant”, “racist”, “closed minded”, “sad and ignorant” in social media, and the list goes on. The attacks significantly intensified after their appearance on the Tucker Carlson Show.

Commenting on the community’s reaction, Nancy Gayer stated: “It’s just not fair that within this unit of study the Chatham school district taught one religion to the exclusion of all others, and for the community to be so unkind and unwelcoming towards us, just for having raised legitimate questions as concerned parents.”

Libby Hilsenrath added, “One of my fundamental obligations as a parent is to guide the religious and secular education of my children. That’s why I will continue the fight against the Islamic indoctrination now taking place at Chatham, regardless of the personal attacks.”

Libby Hilsenrath and Nancy Gayer asked the board to review the curriculum and requested that either the Islam lessons be removed or that the school spend equal time on the study of Christianity and other religions.

Nancy Gayer contrasted the World Cultures and Geography lessons on Islam to her son’s previous experience in fourth grade when he was precluded from including a short quote from the Bible, “he who lends to the poor, lends to the Lord.” (Prov 19:17) The quote was a part of his video presentation related to gathering warm clothes for underprivileged children. Nancy said that her son’s teacher informed him that the brief Biblical quote “belongs in Sunday school, not in the classroom.” Obviously, based upon the World Cultures and Geography lessons being taught to children within the same school district, this abridgment of religious speech does not apply to Islam.