ANN ARBOR, MI – The Thomas More Law Center (“TMLC”), a national public interest law firm based in Ann Arbor, Michigan, filed a federal lawsuit last Friday on behalf of Sara T. Pedro, a Catholic nurse in the Emergency Department of Duke University Hospital, who was discriminated and retaliated against after her employer learned of her pro-life religious beliefs.  Named as defendants in the lawsuit are both Duke University and Duke University Health System, Inc. (“Duke”). 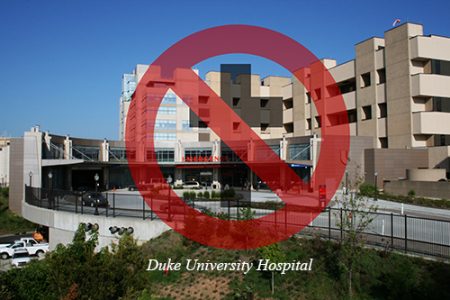 Tyler Brooks, the TMLC attorney handling the case, commented: “This case illustrates the unfortunate dangers faced today by individuals who seek to remain faithful to their religious beliefs in the workplace.”

“With this lawsuit, however, we intend to show that even very large employers must respect the civil rights of their Christian employees,” said Mr. Brooks.

The complaint, which was filed in the U.S. District Court for the Middle District of North Carolina, describes how Ms. Pedro compiled an unblemished record during her eight years of work as a nurse prior to being hired by Duke.

During a classroom orientation, a group of newly-hired nurses that included Ms. Pedro was told by a nursing supervisor that Duke categorically refuses to grant religious accommodations for Emergency Department employees who object to assisting in abortions. Learning about Duke’s pro-abortion policy for the first time, Ms. Pedro made written requests for religious accommodation because of her opposition to abortion. Her requests motivated acts of discrimination and retaliation by Duke in violation of federal and state laws.

The federal lawsuit details several specific acts of retaliation as a result of Ms. Pedro’s requests for religious accommodation. For example, Duke refused to advance Ms. Pedro from training status to regular duty, issued her a written warning for vague and unsubstantiated reasons, and then placed her on administrative leave when she attempted to formally dispute the warning.

To this day, nearly a year after it was first made, Duke has not issued a final decision on Ms. Pedro’s request to be excused from assisting in abortions.  In her complaint, Ms. Pedro alleges that Duke sought to force her out of her job rather than accommodate her religious beliefs as required by Title VII.

The first two paragraphs of TMLC’s complaint describe the essence of the lawsuit:

“At its heart, this case presents a simple yet important question: Must a devout Catholic abandon fundamental tenets of her faith if she wishes to be employed as a nurse at Duke University Hospital?  Despite the fact that Defendant Duke has answered ‘yes’ to this question, federal and state civil rights laws say otherwise. Therefore, Plaintiff Sara Theresa Pedro brings this action to vindicate her rights under the law.

An employee does not forfeit her right to practice her religion and abide by the tenets of her faith when she enters the workplace.”

The Thomas More Law Center defends and promotes America’s Judeo-Christian heritage and moral values.  It supports a strong national defense and an independent and sovereign United States of America.  The Law Center accomplishes its mission through litigation, education, and related activities.  It does not charge for its services.  The Law Center is supported by contributions from individuals, corporations and foundations, and is recognized by the IRS as a section 501(c)(3) organization.  You may reach the Thomas More Law Center at (734) 827-2001 or visit our website at www.thomasmore.org.