ANN ARBOR, MI – Thomas More Law Center (“TMLC”) Senior Trial Counsel, Tyler Brooks, appeared on “Fox News at Night” hosted by Shannon Bream to discuss the New York Attorney General Eric Schneiderman’s knowing use of information from a fake Facebook account created by his Office’s star witness under the fictitious name of Shelly Walker. The purpose of this ruse was to collect information on unwary pro-life sidewalk counselors who were the target of a year-long investigation conducted by the Attorney General’s Office. 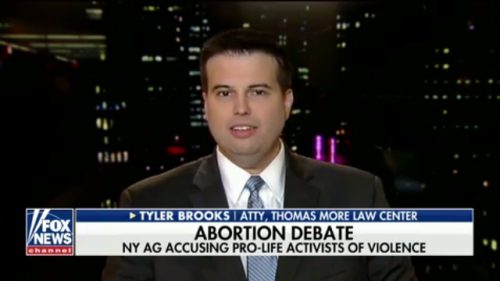 Watch Shannon Bream’s TV interview of Tyler Brooks and her concise summary of Attorney General Eric Schneiderman’s use of the fraudulent Facebook account of his star witness here.

The Thomas More Law Center (“TMLC”), a national public interest law firm based in Ann Arbor, Michigan, represents two of the fourteen persons who were sued by the NY Attorney General Eric Schneiderman in June 2017, Angela Braxton and Jasmine LaLande.

The sidewalk counselors routinely appeared in front of the Choices Women’s Medical Center (“Choices”) in New York City’s Jamaica neighborhood. Information gathered through the fake Facebook account was passed on to the Attorney General’s Office. One of TMLC’s clients in this lawsuit, Angela Braxton, accepted a friend request by the fictitious Shelly Walker under the impression that Walker was a fellow pro-life advocate like herself.  She was not aware that Walker was really one of the Choices escorts leaders.

“The account was set up by a third party without our office’s knowledge and before our office began its investigation. Our office did not ask her to share anything from the account with us.” (emphasis added)

Read the following courtroom testimony from the Attorney General’s star witness (contained on pages 759 -763 of the official court transcript), and form your own opinion.

Here are some relevant parts of the cross-examination of the star witness by TMLC attorney Tyler Brooks. Federal Judge Carol Bagley Amon is referred to in the transcript as “The Court.”

At this point, lawyer for the AG office objects, to which Judge Amon requests Mr. Brooks to clarify his question to the witness:

Q    Well, you said you can’t remember anything specific that you turned over from that account?
A    I can’t at this moment, no.
Q    Okay. Well, then let me refresh your recollection by reading your deposition.

I did read that correctly?
A    Yes.
Q    Was that testimony that you gave in your deposition true?
A    Yes. I told her about photos and posts.
Q    So my next question was:
“QUESTION: What information was that?”
And you answered:
“ANSWER: Photos and videos that she had posted outside Choices. I didn’t quite understand you and you added:
“ANSWER: Also people that she had brought to Choices.”
A    Yes.
Q    I read that correctly?
A    Yes. I told her about Angela’s online organizing.
Q    And that those photos and videos you collected from the website Shelly Walker Facebook page and provided those to the Office of the Attorney General?
A    I think I just told her about it. I don’t remember giving her copies.

Based on the above transcript, it is clear that the Attorney General’s office:

Click here for previous press release on the case.