Today, June 14, Americans commemorate the adoption of the Stars and Stripes as the official flag of the United States. 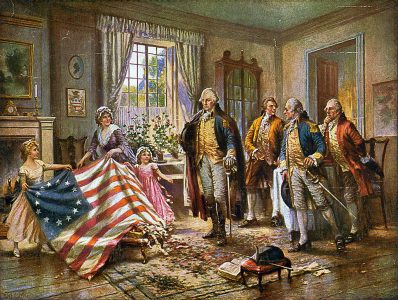 As you honor our flag today, reverently remember . . .

“It is the soldier, who salutes the flag,

and whose coffin is draped by the flag.”

On June 14, 1777, the Continental Congress adopted the American Flag in the First Flag Act. It declared: “That the flag of the United States shall be of thirteen stripes of alternate red and white, with a union of thirteen stars of white in a blue field, representing the new constellation.”

Americans pay their respect to our flag whenever they recite the Pledge of Allegiance or stand and sing the Star-Spangled Banner with their hands over their hearts.

Click here to watch a short clip from Ronald Reagan’s Remarks at a Flag Day Ceremony in Baltimore, Maryland in 1985.