U.K.; U.S. Bowing to Islam — What Would Winston Churchill Do?

In May, the British Press reported that fast food giant Subway has removed ham and bacon from 200 outlets, and switched to preparing meat according to halal (Muslim) rules, to please its Muslim customers.  This means that after the butcher shouts “Allah Akbar,” he slaughters the animal by slitting its throat and windpipe causing it to bleed to death. How would Winston Churchill have reacted to the news? 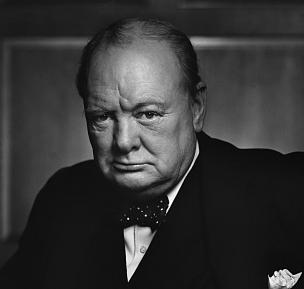 Winston Churchill referring to Islam, in 1899, wrote, “No stronger retrograde force exists in the world.”  And at the 1921 Cairo Conference, commented:  “They hold it as an article of duty, as well as of faith, to kill all who do not share their opinions and to make slaves of their wives and children … Austere, intolerant, well armed, and bloodthirsty.” The Ottoman Empire aligned itself with Germany in WWI and declared jihad against France and Great Britain.   Just a few decades later, Muslims of the Middle East again aligned with Germany against the West.  The Grand Mufti of Arab Palestine al-Husseini served as a Nazi propagandist, encouraging Muslims in Europe to lead armed revolts and attacks on Allied interests.

Churchill took the lead in warning about Nazi Germany. His steadfast refusal to surrender inspired the British resistance to Hitler during the difficult early days of the War when Britain stood alone.  For his wisdom and courage as a defender of freedom, Churchill was the first person to be made an honorary citizen of the United States.

Fortunately, in WWI and WWII our military might defeated German and Muslim alliances.

However—TODAY— dominance over the West is once again the focus of Radical Islam. The tactics are subtler than all-out military conflict, and appear to be more successful.  It is a stealth jihad waged within our borders that takes advantage of the dominance of political correctness in a sea of indifference to the dangers radical Islam poses:

But, bowing to Islam isn’t just confined to Europe. It’s occurring here in the US as well.For instance, through the continuous capitulation to the demands of the Council on American Islamic Relations (CAIR) and other pro- Islamic groups, any criticism of Islam is deemed offensive and banned:

In 1998, at an Ohio youth conference, Sheikh Yusuf al-Qaradawi said, “We will conquer Europe, we will conquer America.”  As al-Qaradawi’s conquest continues to creep across Europe and into the US, we must ask ourselves, what would Churchill do?

How would Churchill react to American Universities forfeiting their identities as centers of free speech and open discussion to the pressures of organizations like CAIR?

What would he say abut government agencies unable to identify the enemy because of political correctness?

Would Churchill have allowed his country to ignore the evidence of the murderous ideology of Radical Islam because of political correctness or because some Islamists asked him to?

What would Churchill do?