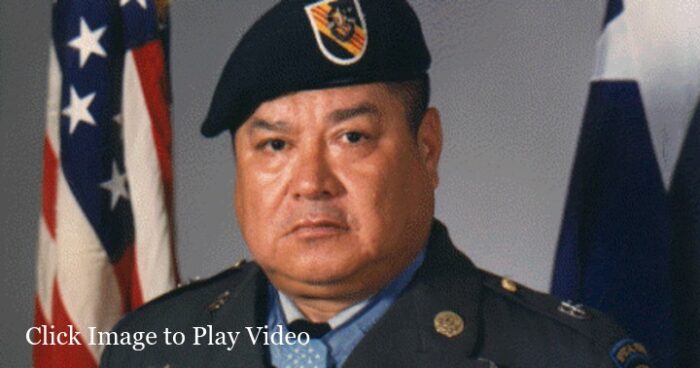 Today, November 11th, Americans commemorate Veterans Day. It’s a day set aside to honor those who have served our Nation in times of war and in times of peace. It’s a day to remember and be thankful that there are men and women who have fought and stand ready to fight to preserve our Freedom.

His story is the story of America. Born near Cuero, Texas, son of a Mexican father and a Yaqui Indian mother, he was orphaned at an early age. His American story—President Reagan awarded him our Nation’s highest honor, the Congressional Medal of Honor, for his unbelievable heroism in the jungles of Vietnam on May 2, 1968. During six hours of operations he suffered 37 separate bullet, shrapnel and bayonet wounds and saved the lives of at least 8 comrades.

A Navy ship bears his name, the USNS Benavidez. Several facilities are named in his honor including an American Legion Post, a city park in Colorado and the Master Sgt. Roy Benavidez Highway. Roy Benavidez died on November 29, 1998, but his love for America and amazing heroism is a lesson to us all on this Veterans Day. He and millions of Veterans throughout our history have sacrificed for Freedom. Let us vow that their sacrifices are not in vain.

Before President Reagan presented Master Sgt Benavidez the Medal of Honor, he reportedly turned to the press and said: “If the story of his heroism were a movie script, you would not believe it.”

“People sleep peaceably in their beds at night only because rough men stand ready to do violence on their behalf.”

God bless our veterans and their families and God bless America.
Sincerely yours,