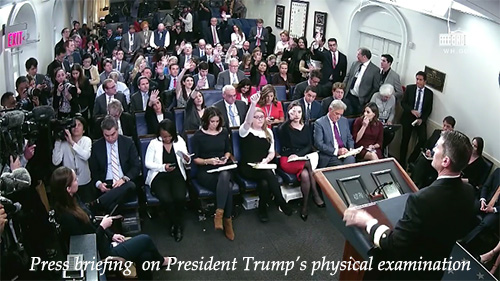 Reporters were apparently disappointed and flabbergasted that President Trump was not diagnosed as a dying, crazy man. It did not fit their political narrative. So, they peppered President Trump’s examining physician, Dr. Ronny Jackson, with questions that bordered on the absurd. One reporter asked if Trump will want sedation during a colonoscopy.  Another asked Dr. Jackson, “Do you keep a tally of how much golf the U.S. President plays?”

We’ve compiled a brief video of just some of the questions the reporters asked. To keep it short, we did not include Dr. Jackson’s responses.  Here’s the video.

By the way, Doctor Jackson is a Navy Rear Admiral with the title Physician To The President, who examined former president Obama in May of 2014 and March of 2016.