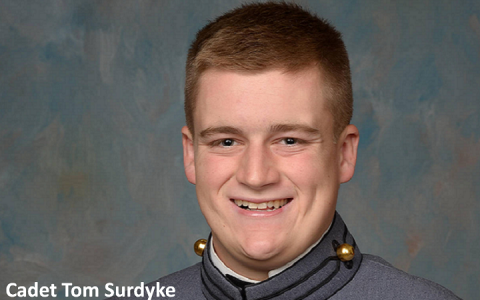 As I read the recent inspiring story about the life and death of Cadet Tom Surdyke in the Wall Street Journal, I was again reminded of the inspiring character of the young men and women attending the Military Academy at West Point.
West Point Cadet Tom Surdyke, born on July Fourth nineteen years ago, was laid to rest on July 4, 2016 at West Point’s cemetery alongside his brothers in the long gray line.
Tom and two friends were swimming in Southampton, enjoying their short summer break, when a rip current pulled in Tom and one of his friends. Though Tom succeeded in keeping his friend afloat, he took in too much seawater and died a few days later. “No one has greater love than this, to lay down one’s life for one’s friends.” (John 15:13).
The author of the article, William McGurn, rightfully pointed out that the purpose of West Point is much higher than just producing legendary generals. He wrote, “The promise West Point makes to the American people is this: When the Army sends your child into harm’s way he will be led by officers of character and ability.”  Cadet Surdyke exemplified those qualities unto death.
My heart goes out to Tom’s family in their time of grief. Please pray for them. I urge you to read the article about Cadet Tom Surdyke and his commitment unto death to fulfill West Point’s motto: Duty, Honor, Country. He joins his brothers in the long gray line:
Grip hands – though it be from the shadows –
While we swear, as you did of yore,
Living, or dying, to honor
The corps, and the corps, and the corps.
© 2019 - Thomas More Law Center • 24 Frank Lloyd Wright Drive • Suite J 3200 • Ann Arbor, MI 48106 • Office: 734.827.2001 • Fax: 734.930.7160