The Thomas More Law Center (TMLC), a national public interest law firm based in Ann Arbor, MI, is defending 26-year old pro-life advocate, Brian Ingalls, against an unprecedented charge by the Maine Attorney General alleging that he was illegally loud in front of the Planned Parenthood abortion facility in Portland, Maine. 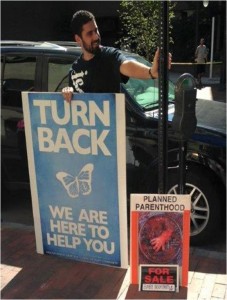 The Maine Attorney General filed the civil rights complaint against Ingalls, threatening the hard-working father with fines of up to $5,000, and seeking to ban him from coming within 50 feet of any Planned Parenthood facility.

According to the Attorney General’s complaint, by publically speaking out against abortion and preaching about Jesus, Brian Ingalls “disrupted the safe and effective delivery of health services.”  For reasons that can only be described as politically motivated, the Attorney General has transformed an unverified noise complaint by Planned Parenthood into a civil rights complaint against a young Christian pro-life advocate.

The Thomas More Law Center is no stranger to the City of Portland’s efforts to silence pro-life speech and protect Planned Parenthood’s business in the city.  Portland previously banned pro-life advocates from the public sidewalk in front of the same Planned Parenthood abortion clinic by enacting a 39-foot buffer zone around all of the entrances, exits, and driveways of the business.

The Thomas More Law Center successfully challenged the constitutionality of Portland’s 39-foot buffer zone ordinance in federal court and obtained a judgment declaring that the buffer zone violated the First Amendment. Now, the Attorney General has launched a new attack against pro-life speech just days after the judgment was entered.  This is the first time that the Maine Civil Rights Act has been used against pro-life advocates in an attempt to stifle their message and create a de facto 50-foot buffer zone.

Richard Thompson, TMLC’s President and Chief Counsel and a former prosecuting attorney, added: “The Attorney General’s actions in this case are a blatant abuse of her powers to aid the pro-abortion political establishment dominating the City of Portland.”

The Attorney General’s complaint relies solely on Planned Parenthood’s complaint to the Portland Police Department alleging that Ingalls could be heard inside of the building. His continued preaching has now been deemed a civil rights violation by the Maine attorney general.