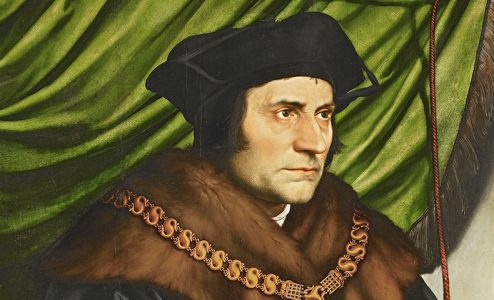 “If we lived in a state where virtue was profitable, common sense would make us saintly. But since we see that avarice, anger, pride and stupidity commonly profit far beyond charity, modesty, justice and thought, perhaps we must stand fast a little, even at the risk of being heroes.” – Thomas More

Today, June 22, the feast day of Saint Thomas More, is especially important to the Thomas More Law Center, as he is the namesake of our organization and in many ways, exemplifies the mission and ideals to which we aspire in our daily work as a public interest law firm.

We remember More as a man devoted to Christ who willingly sacrificed his power, his wealth, and ultimately his life out of love for Christ and His Church.

The subject of the 1966, Academy award-winning film, “A Man for All Seasons,” Thomas More is recognized as one of history’s most admired figures. An outstanding lawyer, author, judge and diplomat, he rose to the highest office in England next to the King. Yet he chose death rather than betray his conscience. More was beheaded on July 6, 1535 on orders of King Henry VIII, his one-time friend, because he would not accede to the Oath of Supremacy declaring Henry to be the supreme head of the Church of England.

As he stood on the scaffold before his execution, he proclaimed to the crowd “I die the King’s good servant, but God’s first.” In that simple phrase More summarizes the call of Christian discipleship and the proper perspective we must all bring to our daily lives and work – to be God’s servant first!

“He represents to history its universality, its belief in spiritual values, and its instinctive sense of otherworldliness.”

“What enlightened his conscience was the sense that man cannot be sundered from God, nor politics from morality.

And it was precisely in defense of the rights of conscience that the example of Thomas More shone brightly. It can be said that he demonstrated in a singular way the value of a moral conscience which is ‘the witness of God himself, whose voice and judgment penetrate the depths of man’s soul’ even if, in his actions against heretics, he reflected the limits of the culture of his time.”

So, has that much really changed?

Liberals want to confine a Christian’s religious freedom to a matter of belief rather than expression and action. In other words, you can think whatever you want, just keep it within the confines of your brain.

But we define ourselves by our actions.  We are citizens of both the earthly and heavenly cities, and so, will act in accordance with realities of both on issues such as marriage, abortion, the sanctity of human life, euthanasia, what is taught to children in public schools, and the list goes on.

It takes moral courage to say “no” to those in power. The Thomas More Law Center has represented many modern-day Thomas Mores in the 20 years of our existence. And that number is increasing.

Indeed, there are courageous men and women in our culture today. They will not be beheaded for their moral and religious based actions, but they are more likely to be bankrupted by punitive civil penalties, ostracized from their profession and even their churches (Thomas More was highly critical of the Bishops of his day), ridiculed by the media and culture elite and even their neighbors, fired from their jobs, frozen out of certain occupations and professions.

Like Thomas More, they will be condemned as “criminals” who defy the general order because of their religious consciences. They will be told, “You can keep your consciences to yourself as long as you do what society and the government demands.”

“Thomas More is more important at this moment than at any moment since his death . . .but he is not quite so important as he will be in about a hundred years’ time.”

Although it hasn’t quite been a hundred years, Chesterton’s prediction is already proving true. In an increasingly powerful and militant secular culture that exhibits its growing hostility towards Christians, Thomas More provides the model for all faithful followers of Christ— regardless of denomination.

In his life and death, Thomas More summarizes the call of Christian discipleship and the proper perspective we must all bring to our daily lives and work – to be God’s servant first!