75 years ago, over 156,000 soldiers from the United States, Britain and Canada, stormed the beaches of Normandy to bring down Hitler and Nazi Germany.

Given the code-name of Operation Overlord, D-Day was the largest amphibious military assault the world has ever seen. General Dwight Eisenhower, the Supreme Commander of the Allied forces, spoke to his troops on the eve of the invasion.

Click the photo below to listen to his message and view archival footage of that historic day. 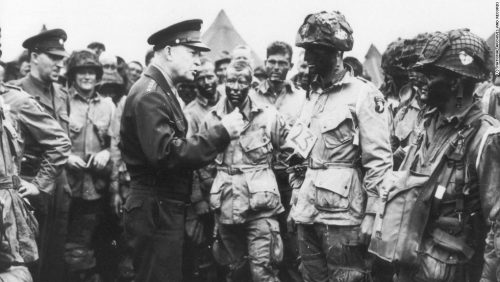 2,501 Americans died on the first day of battle.

But D-Day wasn’t just the beginning of the end of WWII. Allied troops weren’t just attacking Nazi Germany. This was an attack on totalitarianism to preserve Christian Western civilization.

President Ronald Reagan, during his speech on the 40th Anniversary of D-Day at Normandy, closed with these inspirational words:

“Strengthened by their courage, heartened by their valor, and borne by their memory, let us continue to stand for the ideals for which they lived and died.”

One Response to “
The 75th Anniversary of D-Day: Let Us Never Forget Their Sacrifices And Ensure They Were Not In Vain
”