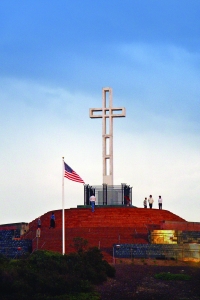 ANN ARBOR, MI – The California Supreme Court, yesterday, affirmed the precedent-setting decision of a California appellate court, which upheld the right of the people of San Diego to transfer the Mt. Soledad veterans memorial and cross to the federal government. At the same time, the Court denied the ACLU’s attempt to prevent the publication of the lower court decision favorable to the cross and veterans memorial. The ACLU was seeking to have the decision suppressed so that it would not be used against them in future lawsuits.

The Thomas More Law Center, a national, public interest law firm based in Ann Arbor, Michigan, attacked by the other side because it was a Christian advocacy group, figured prominently in the victory. The Law Center represented San Diegans for the Mt. Soledad National War Memorial in the successful appeal, and it represented them in opposing Paulson’s petition to the California Supreme Court. The Law Center also filed a lengthy objection to the ACLU’s request for depublication.

Richard Thompson, President and Chief Counsel for the Law Center, commented, “This is a major victory for religious freedom, the democratic process, and for the people of San Diego who voted overwhelmingly to preserve the historic Mt. Soledad veterans memorial and cross for future generations.” Thompson commented further, “It was also important for us to defeat the ACLU’s sinister plan to have the decision of the California appellate court depublished. The ACLU wanted the decision depublished so it could continue with its anti-Christian agenda free from opposing precedent. This appellate court decision will forever be a stumbling block for the ACLU—and we are pleased about that.”

This past November, the Fourth District Court of Appeals in California upheld the constitutionality of Proposition A—the hugely successful referendary petition drive that transfers the Mount Soledad memorial property, including the cross, to the federal government for use as a national veterans memorial. In a special election held in July 2005, Proposition A passed by an overwhelming 76% of the vote. However, a state superior court judge issued an order halting Proposition A, claiming that this transfer was unconstitutional.

In a lengthy opinion, the California court of appeals reversed the superior court judge and held that the transfer of the memorial was in fact constitutional. The Thomas More Law Center represented San Diegans for the Mt. Soledad National War Memorial in the successful appeal. San Diegans is the organization that was responsible for the passage of Proposition A. As a result, it was granted party status in the case.

In his petition, Paulson’s attorney asked the California Supreme Court to review the appellate court decision because he claimed the decision conflicts with precedent on an issue that is of great public importance. The Thomas More Law Center disagreed. As the Law Center pointed out in its answer, Paulson’s claims were without merit because the California appellate court applied well-established law to reach its unanimous conclusion that Proposition A was constitutional. The Law Center also pointed out that the California Constitution is not hostile to religion, contrary to Paulson’s assertions.

Charles LiMandri, the West Coast Regional Director for the Law Center, commented, “We are pleased that the California Supreme Court rejected Paulson’s effort to disturb the well-reasoned, unanimous decision of the appellate court. This decision protects the will of the people and their desire to preserve a historical, veterans memorial for future generations.”

Robert Muise, a Law Center attorney working on the matter, commented, “This latest attack on the Mt. Soledad veterans memorial was successfully thwarted. We will not allow our freedoms to be held hostage by one atheist and his attorney.”

The Thomas More Law Center defends and promotes the religious freedom of Christians, time-honored family values, and the sanctity of human life through education, litigation, and related activities. It does not charge for its services. The Law Center is supported by contributions from individuals, corporations and foundations, and is recognized by the IRS as a section 501(c)(3) organization. You may reach the Thomas More Law Center at (734) 827-2001 or visit our website at www.thomasmore.org.