ANN ARBOR, MI – If you speak out against building a mosque in your community, you may be slapped with a subpoena demanding all your personal documents, including emails, voicemails, text messages, and social media posts concerning Muslims, Islam, mosques, the Quran, Muslim worship or prayer services, wudu, imams, burkas, hijabs, Sharia, jihad, or anything else associated with or related to Muslims or Islam. 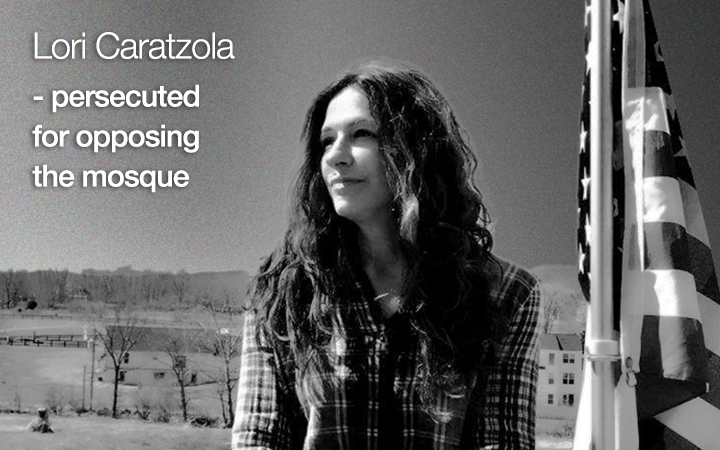 This was part of the harassment and intimidation experienced by scores of private citizens of the small New Jersey town, Bernards Township (also known as Basking Ridge), who spoke out at public hearings against a plan to build a disproportionately-sized mosque on a small piece of residential property.  The mosque project, sponsored by the Islamic Society of Basking Ridge (“ISBR”) and its president, Mohammad Ali Chaudry, was denied by Township officials for not complying with local building ordinances.

On March 10, 2016, ISBR and Mohammad Ali Chaudry sued Bernards Township in federal court, claiming various violations of the Religious Land Use and Institutionalized Persons Act.  Shortly after, ISBR had coercive subpoenas served on private citizens whose only involvement was voicing concerns at public planning board meetings about whether the proposed mosque complied with local building ordinances.

The United States District Court for the District of New Jersey recently granted the Thomas More Law Center, a national public interest law firm based in Ann Arbor, Michigan, permission to represent, without charge, several of these citizens who desired to quash the coercive and abusive subpoenas.  Westfield, New Jersey attorney Michael P. Hrycak is assisting the Law Center.

Richard Thompson, President and Chief Counsel of the Thomas More Law Center, commented: “ISBR is setting a dangerous unconstitutional precedent by abusing a court process to chill and trample on the First Amendment Rights of private citizens whose only involvement was to speak out against the mosque at public hearings. Because the U.S. Supreme Court has held that speech at a public place on a matter of public concern is entitled to special protection, we will ask the Federal District Court to quash the subpoenas served on our clients as a misuse and abuse of the Court’s process.”

Lori Caratzola, described in the ISBR Complaint as a fervent and frequent objector to the mosque, was a prime target for ISBR’s personal attacks.  She was personally mentioned over a dozen times in their Complaint.  Yet she has remained steadfast in her opposition.  Ms. Caratzola commented:

“Being served with a Federal Court Subpoena to turn over all my personal communications including voicemails, social media, emails, notes wherein I make any mention of anything having to do with Islam is an absolute violation of my First Amendment rights. I was a citizen exercising my right to attend public planning board meetings about a land use application that affected my community.”

“Dr. Chaudry’s clear intent was to embarrass, strike fear, silence and cause financial harm to any citizen who dared oppose his nonconforming project.  And if these subpoenas are allowed to stand, it will set a chilling precedent for all citizens who wish to exercise their Constitutionally protected right to free speech and to petition their government.

“I have lost days, probably weeks, devoting time to trying to find counsel – only to find most attorneys are afraid of challenging an Islamic group in today’s political climate.”

“ISBR’s subpoena of private citizens’ communications with local government, as well as all personal email and social media statements related to ‘anything associated with or related to Muslims or Islam’ is in direct violation of speech protections enshrined in the Constitution and in Supreme Court rulings. ISBR’s blatant efforts to chill the free exercise of speech while intimidating local citizens with these subpoenas must not only be denied, but must be rebuked, by the courts.”

Cody Smith, another subpoenaed resident who opposed the Mosque, stated:

“The planning board did exactly what it should have done—set emotions aside and judge ISBR’s application solely on its merits and whether it complied with our local regulations. It’s unfortunate that Dr. Chaudry, the Township’s former mayor, has resorted to an all-out smear campaign and retaliation against residents who exercised their fundamental Constitutional rights of Free Speech in a public forum.”

Soon after ISBR’s lawsuit, DOJ investigators opened another coercive front by attempting to   interview the private citizens who opposed the mosque.  Eight months later, the DOJ filed its own lawsuit against the Township.

Astonishingly, the DOJ was dismissive of an apparent conflict of interest between Mohammad Ali Chaudry and the DOJ’s chief investigator, Caroline Sadlowski, both of whom were serving together on the Center for Religious and Cultural Conflicts board at Drew University.