ANN ARBOR, MI – The Thomas More Law Center (“TMLC”)  petitioned the U.S. Supreme Court on Monday (11/06/17) to review a U.S. Court of Appeals for the First Circuit’s decision that allows government officials to use a noise provision to prevent peaceful sidewalk counseling in front of abortion facilities. The petition for review is the latest step in TMLC’s legal battle to prevent the State of Maine from silencing peaceful, pro-life sidewalk counselors. 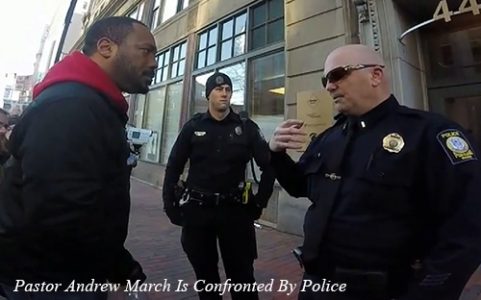 Kate Oliveri, the TMLC attorney who drafted the petition, commented: “The First Circuit’s dangerous opinion would allow all levels of government to restrict any speaker with whom they disagree by creative legislation that targets the reason the speaker engages in speech rather than the actual words spoken. This, however, is a distinction without difference that affords governments the right to silence all speech they find disagreeable.”

In 2015, TMLC filed a lawsuit on behalf of Pastor Andrew March against the Maine Attorney General and several police officers challenging the constitutionality of a noise provision in the Maine Civil Rights Act (“MCRA”). That provision prohibits noise outside healthcare buildings made with the intent to interfere with health services. Under Maine law, the term “health services” includes abortions.

Accordingly, this seemingly innocuous statute gives law enforcement officials the power to stop pro-life counselors from speaking on the public sidewalk in front of abortion facilities because they equate an intent to discourage a woman from having an abortion as an intent to interfere with a medical procedure.

The federal district court agreed with TMLC’s legal position and barred the State from using the noise provision because it was a content-based restriction on speech in violation of the First Amendment. However, the Maine Attorney General appealed the decision to the U.S. Court of Appeals for the First Circuit, which reversed the lower court and created the false dichotomy that the content of speech can somehow be separated from the purpose of the speaker.

TMLC’s lawsuit on behalf of Pastor March is the third case in three years in which the Law Center has defended pro-life speakers on the public sidewalks of Portland, Maine.  The first federal case, which was filed in 2014 on behalf of several sidewalk counselors, successfully challenged the constitutionality of Portland’s ordinance that established a 39-foot buffer zone around abortion facilities.

However, only two weeks after conceding that the buffer zone was unconstitutional, the Maine Attorney General filed a state lawsuit against Pastor Brian Ingalls under the noise provision of MCRA. TMLC is still defending Pastor Ingalls in the ongoing litigation.

The third case occurred less than a month after charges were filed against Pastor Ingalls. Police, citing the same noise provision in MCRA, issued an official warning to Pastor March, who had taken up Pastor Ingalls’ mantle preaching outside the abortion facility. TMLC filed the federal lawsuit that the petition asks the Supreme Court to review.