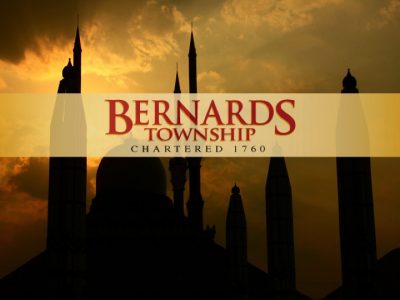 In March 2016, the Islamic Society of Basking Ridge filed a lawsuit in the New Jersey Federal District Court alleging that Bernards Township had discriminated against the Islamic Society when it declined to approve the construction of a large mosque on a lot that was far too small to handle the contemplated structure.  A similar lawsuit was filed by the federal government a few months later.

On May 23, 2017, the Township Committee and the Township Planning Board held a public meeting in which they held a previously unannounced vote to enter into a settlement agreement relating to the two lawsuits filed against them. The settlement agreements were matters of extraordinary public interest because they required the payment of $3.25 million dollars to a local mosque and its attorneys as well as a grant of a variance in the zoning ordinances to allow the mosque to be built. The public was not told of the terms of the settlement agreement or allowed to comment on the vote until after the vote had been taken.

On May 25, 2017, the TMLC, through its New Jersey affiliate attorney, Michael Hrycak, filed a lawsuit in the Superior Court of New Jersey on behalf of Plaintiff, Cody Smith, under the New Jersey Open Public Meetings Act (OPMA) for open and flagrant violations of that statute by the Township because they willfully sought to prevent public notice and comment on issues of profound public concern. The lawsuit alleges that Bernards Township entered into an agreement to settle the case brought against it by the Islamic Society of Basking Ridge and the federal government, without ever disclosing to the public beforehand, the terms of the settlement agreements as required by the New Jersey Open Public Meetings Act (OPMA).

On May 30, 2017, despite being notified of the State lawsuit seeking to void the settlement, the Township asked a federal judge to enter an order based on the settlement agreement, without telling him about this lawsuit.

On June 13, 2017, apparently seeing that their earlier votes without public notice were infirm, the Township Board held a second vote, supposedly to ratify the earlier vote. Then on June 21, 2017, the Township removed the state case to the Federal District Court.

TMLC attorney Jay Combs commented: “The hearings held by the Township after the OPMA violations, were really just sham proceedings to cover their deliberate violations of the law which prejudiced the public’s rights during the first hearing. At the time of the second hearing on June 13th, they had already presented the signed settlement agreements to the federal judge and requested the judge to issue an order ratifying those agreements. The second hearing was simply window-dressing because they had no choice but to vote to approve the settlements again. The public deserves, and demands, more from their elected officials.”

In their answer to TMLC’s State Complaint, the Township attempted to sweep their violations under the rug by alleging that, even if they violated the New Jersey Open Public Meetings Act by voting on two settlement agreements without giving the public proper notice, those votes were later cured by what they called a de novo hearing on June 13, 2017 in which they voted again on the same settlement agreements. The problem with that argument was that the settlement had already been presented to the federal judge and was already memorialized in a court order. To show its disdain for the public, the Township informed the judge it has no legal obligation to allow public comments on the settlement agreements.

Regarding the Township’s removal of the State case to the Federal District Court, TMLC filed a motion in Federal Court alerting the Court to the fact that the Township of Bernards, in their Answer to the TMLC lawsuit, has attempted to paper-over their violations of the New Jersey Open Public Meetings Act (OPMA) by holding the sham hearing.

On the same day, the TMLC also asked the judge to send the State lawsuit back to the New Jersey state court, where it was originally filed, after the Township had removed the case from state court to federal court on June 21, 2017. The TMLC pointed out to the federal Judge that the lawyers for the Township, although they knew of the TMLC lawsuit seeking to void the settlement agreements, ensnared him by presenting these voidable agreements to the Judge without disclosing to him that a lawsuit was pending, which raised serious questions about the legality of the agreements.

The disturbing omissions of fact by the attorneys for the Township follows in the long and troubling pattern of the Township in the settlement of this case.   They have rushed toward a pre-ordained settlement while ignoring the laws requiring public communication and input and finally shoved the settlement down the throats of unwilling citizens. The TMLC is vigorously defending the rights of Bernards Township citizens to a transparent and responsive Township government.