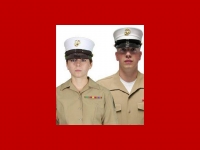 TMLC has verified this story. We obtained a copy of the survey which references putting both men and women in the “girly” hat and have verified that the   Department of Defense (a part of Obama’s administration) has in fact asked the Armed Services to move towards gender neutral uniforms.

Even though an Army veteran, I have always admired the Marine Corps uniform and the history behind it.  But now in an effort to further emasculate our military, the Obama administration has directed a unisex hat for the Marine Corps.  The Marines I know would “rather fight than switch.”  And despite the serious damage to our national security caused by force reductions and incomprehensible proposals like giving “medals for not shooting,” this new Obama directive has forced the Marine Corps to spend their time squabbling about fashion, hats in particular.

In a scene one would expect from the board room of a glossy fashion magazine, Marine Corps officials have been reduced to women in impractical shoes arguing about whether or not a proposed amendment to the Marine Corps uniform is “too French” for the US military.

The fashion debate comes as a result of an Obama directive to create a more unisex uniform for members of the Armed Forces. Currently, men and women wear gender specific uniforms and hats.

This particular Obama “agenda before national security” move to replace the current Marine Corps hat, or cover, with one that is more unisex comes with a sticker price of over $8 million dollars. The porter’s hat design with a smaller ridge than the current design is similar to an older design worn by the Marine Corps for 6 years from 1908-1914.

Obama’s directive comes at a time when the US military is reeling from the budget crisis. Yet, for the Obama administration, the focus on hats over bullets is par for the course. Obama’s priorities are reminiscent of Humphrey Bogart’s focus on strawberries in the 1954 war movie “The Caine Mutiny.”

Unfortunately, for our National Security, the military just isn’t on Obama’s list of priorities unless it’s to inflict damage. The recent partial government shutdown brought outrageous examples of Obama’s social policy approach to his Commander-in-Chief role which actually, in some instances, cost the US more money beginning with his initial policy barring veterans from war memorials, continuing through to bizarre interpretations of the “Pay Our Military Act” leading to the denial of timely military death benefits and the suspension of religious services for military installation personnel served by contracted Catholic chaplains.

Similarly, other past social agenda items forced on the military have also highlighted Obama’s willingness to serve his own social ideology including repeal of Don’t Ask, Don’t Tell which according to General James Amos, the Marines Commandant, presents a risk to unit cohesion and combat effectiveness.